In the history of pro boxing, there have been several hundred Trevors. With significant name recognition are Trevor Berbick, Trevor Bryan, Trevor King, Trevor Ambrose, Trevor Evelyn, Trevor Francis, and Trevor McCumby. The best known of the boxing Trevors is ex-World Heavyweight champion Trevor Berbick, who decisioned Muhammad Ali in Ali’s last bout in 1982, “The Drama in The Bahamas,” followed by Trevor Bryan.

Trevor Berbick, 49-11-1 with 33 knockouts, a Jamaican fighting from of Montreal, Canada, a former World Boxing Council World Heavyweight champion, fought between 1976 and 2000. After serving 15 months in Canadian jail for various convictions, Berbick avoided Canadian deportation, and eventually snuck into the United States, where he was later discovered after being arrested in Miami, Florida on a traffic violation in 2002. After a month in immigration custody, Berbick was deported back to his native Jamaica.

Tragically, Trevor Berbick was found dead on the morning of October 28, 2006. His nephew Harold Berbick, with accomplice Kenton Gordan, bludgeoned him to death, and left his body in a church courtyard. Rev. Trevor Berbick was a minister. Prosecutors said the murder weapons were a pipe and a crowbar. The motive for the killing was a family inheritance land dispute between uncle and nephew. Harold Berbick and Kenton Gordon were convicted of the killing on December 20, 2007. Berbick was sentenced to life in prison. Gordan was sentenced to fourteen years. Berbick’s age was supposedly 52, but news outlets reported different sources putting Berbick’s correct age at anywhere between 49 and 56, a modern day new Sonny Liston age mystery in the heavyweight division at time of death.

Trevor Bryan, 22-0 with 11 knockouts, Schenectady, New York, is the current regular World Boxing Association World heavyweight champion. He retained his title by a close 12 round split decision win over a game challenger, shrimp fisherman Jonathan Guidry in Warren, Ohio, Bryan scoring a knockdown in round 12. Bryan, promoted by Don King, is looking for a big money fight, perhaps against Tyson Fury, Alexander Joshua, Deontay Wilder, Oleksandr Usyk, Daniel Dubois, or any big heavyweight names out there.

Trevor King (Tom Thomas), a featherweight from Sydney, Australia, compiled a career record of 61-1 with 35 knockouts between 1946 and 1953, returning to win by knockout in a comeback bout in 1953. King never fought outside Australia, and never fought for a title of any kind. Accidents and illness interrupted his career. King is a member of the Australian National Boxing Hall of Fame.

Forgotten Trevor Ambrose, 11-18 with nine knockouts, Leicester, United Kingdom, fought between 1990 and 1996, was a veteran super middleweight and light heavyweight. After losing his pro debut, Ambrose won seven of his next nine bouts. Ambrose then became a legendary go the distance trial horse, losing 15 of his last 18 bouts, including getting stopped by such rising future world champions as Joe Calzaghe, Robin Reid and Thulani Malinga. The magic in the career of Ambrose is in the magic upsets within the losing streak which marked his journeyman career. Ambrose, a master of dramatic dive: retired 32 win legendary British middleweight warrior Errol Christie, knocking him out in the second round in Manchester in March 1993; retired 14 win BBBofC Southern Area Middleweight champion Winston Wilson by fifth round stoppage in Watford in February 1994, and in May 1996, Ambrose stopped 12-0 then undefeated future European Middleweight champion and world title challenger Mads Larsen of Denmark in the second round due to a cut over Larsen’s right eye caused by an Ambrose elbow in his final pro bout.

Fighting between 2010 and 2018, light heavyweight Trevor McCumby. Glendale, Arizona, went 25-0 with 19 knockouts and one No Contest. After winning an eight round decision over Felipe Romero in Oklahoma City, McCumby retired and was never heard from again. 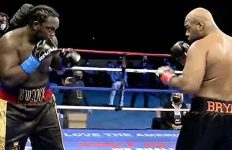