In September of 1985 IBF World Heavyweight champion Larry “The Easton Assassin” Holmes, 48-0, just came off another disputed win this time over Carl “The Truth” Williams like he did with “Terrible” Tim Witherspoon earlier in his career.

I judged his fight that night with Michael “Jinx” Spinks the light heavyweight champion winning 8-7. I gave Holmes the rematch one 9-6 though he was declared the loser.

After the loss to Spinks, Holmes said “Marciano couldn’t wear my jock strap!” What did Rocky have to do with the Holmes loss? If they fought and Holmes stuck out that illegal football straight arm Rocky would have ducked under it with a right uppercut and broke the elbow of Holmes. Rocky had too much heart for Holmes.

After Holmes at 44-0 in a non-title fight against the rules of the division against a non-contender in Marvis Frazier, 10-0, who was thrown to the wolves by his father, “Smokin” Joe Frazier, Holmes, who after stopping Marvis in 2:57 of the first round said “that’s for the whippings your daddy gave me in the gym!”

Former WBA, WBC, WBO and IBF Middleweight champ Bernard “The Executioner” Hopkins, 48-4-1, prior to the fight he had with WBO World Super Middleweight champ Joe “Pride of Wales” Calzaghe, 44-0, said “no white boy is going to beat me or I won’t be able to go back to the hood!”

Hopkins had Calzaghe down in the first round only to go onto lose a split decision. Calzaghe would go onto his next and career final fight defeating multi-division champ Roy Jones, Jr. ending his career due to damaged hands at 46-0.

Hopkins, 51-5-2, would go onto win the WBC World Light Heavyweight title from Jean Pascal 26-1-1, after drawing with him in his previous fight this time in May of 2011. In November of 2014 his racist remarks toward Calzaghe came back to bite him when he lost to Russian Sergey “Krusher” Kovalev, 25-0-1. Then in his next and career ending fight was knocked through the ropes as his feet were still on the canvas while the rest of his body out of the ring by another “white boy” in Joe Smith, Jr., 22-1, in the eighth round Hopkins tried to say he was pushed out of the ring and couldn’t continue due to injury to the foot or ankle that never left the ring. 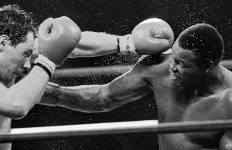