Don King Promotions with 89 year-old Don King returning to boxing with a show that had the WBA’s interim heavyweight champion and No. 1 contender Trevor Bryan stopping former WBC champion Bermane “B. WARE” Stiverne ranked No. 11 in 11 rounds Friday at the Seminole Hard Rock Hotel & Casino in Hollywood, Florida.

Even though Stiverne had been stopped in last two bouts without a win since 2015 one wonders how the WBA even had him ranked. This was billed as a vacant title fight even though Anthony “AJ” Joshua is the WBA champion.

By the fifth round Stiverne was out of gas and well behind going into the eleventh and final round. A pair of knockdowns by Bryan forced referee Frank Gentile at 1:26 of the round to wave it off after Stiverne beat the count but was defenseless with Bryan landing punches. 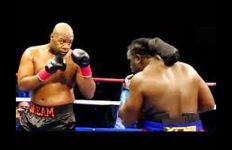 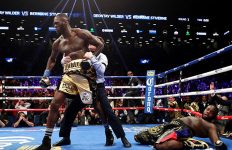 Deontay “The Bronze Bomber” Wilder Destroy’s Stiverne in One!→ 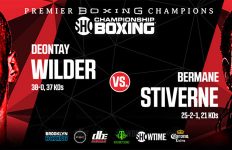