In the twelfth and final round it was a war going either way.

“I have lost close fights and it was good coming back with this win. It was a tough fight with Sam. I hadn’t had a win in two years. There was no pressure on me with no crowd. At times it was tough but I dug down in this fight,” said Cheeseman. “It was a tough fight and Ted got the decision today. I’m sure people would like to see it again,” said Eggington.

In the first two action-packed rounds both fighters had their moments. In the fourth round the action continued with Tennyson hurting Gwynne with a minute left in the round with a right on the chin. In the fifth round Gwynne seemed to take the round out landing Tennyson drawing blood from the nose of Tennyson. In the sixth round a vicious right from Tennyson on the chin dropped Gwynne. He had Gwynne out on his feet driving him across the ring without return when the referee Phil Edwards wisely stopped the fight.

“He has won the British and EBU titles at super featherweight and now British at lightweight and is ready for the best. Gwynne showed toughness that Tennyson needed in a great fight,” said Eddie Hearn.

In the first round it was close with Gill faster but Bellotti outworking him. In the second and third rounds Gill used his speed, jab and left hooks to take the rounds from Bellotti. In the fourth round some fifteen seconds gone Bellotti landed his best punch a right to the chin of Gill getting his attention. Bellotti’s face showed marks from the battle.

In the sixth round a left hook from Gill rocked Bellotti who suffered a cut over his right eye. In the seventh round Gill used good combinations to the head causing the cut of Bellotti’s to run down the side of his face. In the ninth round Gill continued using his jab to keep Bellotti behind in the fight.

In the tenth and final round Bellotti landed his best punch a right to the chin of Gill. Gill’s speed has kept him ahead in the fight but Bellotti knowing he was behind landed some wild shots. Referee was Ian-John Lewis.

In the first two rounds Wardley seemed to get the best of it with an effective jab and able to slip punches. In the third round back to the corner Wardley landed a left hook to the chin hurting Vallily and continued with a dozen unanswered punches driving Vallily across the ring before the referee Howard Foster called a halt.

“I’m over the moon and grateful winning the title. I knew where the gaps were and in round three it was over,” said Wardley.

In the first round it was all Smith ending the final seconds with a left hook and right knocking Bennett off balance. In the third round Smith continued landing solid shots to the head of Bennett ending the round with a right to the head rocking Bennett who kept walking into punches being the aggressor. In the fourth round Smith bloodied the mouth of Bennett and even went to the body well.

In the fifth round a sensational right from Smith on the left ear of Bennett and he went down and out as referee Ian-John Lewis counted to 8 and waved it off. It was a sensational performance by Smith.

“He caught me with a good right in the first round and he is a good fighter. I knew I would have to maneuver around and catch him with a good punch,” said Smith. 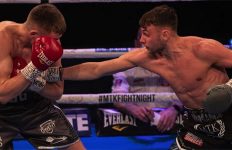