In the first round an overhand right from Chisora on the side of Parker’s head and down he went for an 8-count from referee Steve Gray after seven seconds. In the next three rounds Chisora did the punching while Parker tried holding him off with a jab. In the fifth Parker’s jab won him the round.

From the eighth through the eleventh rounds the fresher of the two Parker outworked Chisora who kept coming forward. In the twelfth and final round Parker seemed to pull it out!

“It was a tough fight. I have to go back to training with Andy in the future. We can do it again,” said Parker. “I train hard and thought I won but they don’t like me. It’s horrible and these are the results I get. Joe wants to give me a rematch and I will take it,” said Chisora.

In the first two rounds Bivol kept coming forward using an effective jab and a power punch right against his taller opponent in Richards. In the third Bivol continued coming forward until with a minute left in the round a right from Richards on the chin of Bivol had the latter come right back and continue to take over. In the sixth round Seems Richards doesn’t throw his right until the final minute of each round. Bivol keeps him honest with a two fisted attack when needed.

In the seventh the action picked up in the latter part of the round with Bivol forcing the action opening up and trying to bait Richards into throwing his rights to be countered. In the ninth through the eleventh rounds the action picked up with Richards throwing his right from the start and Bivol ending the rounds well. In the twelfth and final round it was the first referee Howard Foster had to break up the fighters. It was a good final round otherwise for both. Considering his long layoff Bivol showed little ring rust and Richards didn’t embarrass himself.

“The fight was tough for me. He was a good boxer and a thinking one. My being off a year and a half it was good to fight again. It doesn’t matter who wants to fight me first. I’m open,” said Bivol.

In the first round a right followed by a left hook from Straffon on the chin of Tennyson and down he went for an 8-count. Upon rising Straffon was all over Tennyson landing a flurry of punches before referee Michael Alexander wisely stepped in to stop the fight.

In the first three rounds it was all Taylor with Jonas holding too much. In the fourth Jonas decided to go on the offense taking the round. In the sixth and seventh rounds southpaw Jonas landed right hooks on the chin and then the body work taking the rounds. In the ninth Taylor bloodied the nose of Jonas with a solid right. In the tenth and final round it was all action with Taylor having Jonas on the defense at the end. Referee was Marcus McDonnell.

“I got off to a slow start and thought I won the championship rounds. I knew I had to win those rounds,” said Taylor.

In the second round Eubank flurried having Morrison hurt before backing off. In the third Morrison landed a right on the side of the head of Eubank knocking him off balance but didn’t follow up. In the fifth Eubank bloodied the nose of Morrison having him against the ropes but Morrison came back enough to stop the first real action of the fight.

In the sixth round Eubank went on the attack having Morrison in trouble but once again Eubank backed off. It looked like he was imitating his new trainer former world champion Roy Jones, Jr. In the seventh Eubank landed a dozen unanswered punches before falling into a clinch in the final minute. In the final three rounds the action only came in spurts. Referee was Michael Alexander.

It was all Hatton with Dunn a good survivor. Score was 40-36.

In the first round after a minute a right from Fisher on the chin hurt Williams. Fisher would then go into fouling tactics light rabbit punching and forearms into the face the rest of the way. In with an inferior opponent these tactics by Fisher are not needed. In the third round the referee Howard Foster finally decided to call a halt to this mismatch. 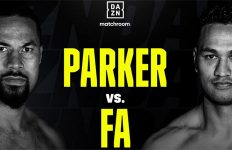