Commey, 28-2 (25), is from Accra, Ghana, living in Bronx, New York, won the vacant IBF World Lightweight title in February stopping Chaniev, 13-1 (6), of Nazran, Russia, in the second round. He had Chaniev down three times before the stoppage at The Ford Center at the Star, Frisco, Texas.

Commey’s only two losses were by split decision in 2016 in back-to-back fights. In September of that year he lost in a vacant IBF title fight to Robert Easter, Jr., 17-0 and in December to Denis Shafikov, 37-2-1. He has since won his last four fight with the last three by stoppage.

Beltran lost the WBO World Lightweight title in August of 2018 to Jose “Sniper” Pedraza, over 12 rounds. In his most recent fight in February, he won the vacant WBC Continental Americas stopping Japan’s Hirok Okada, then, 19-0.

In the co-feature NABF Super Welterweight and WBO NABO Dominican Carlos Adames, 17-0 (14), of Washington Heights, NY, defends his title defending against Patrick Day, 17-2-1 (6), of Freeport, New York. In his last fight in April, Adames stopped Frank “Notorious” Galarza, 20-2-2, at MSG in New York. Day has won his last six fights, all by decision. 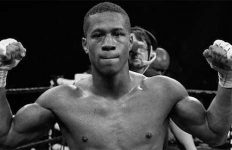 A Day That Won’t Be Forgotten→