In the first four rounds Sanchez had the edge rocking Lopez in the fourth round. In the fifth and sixth rounds Lopez started using his jab in taking his two rounds. In the seventh round Lopez hurt Sanchez with a right on the chin. In the eighth and ninth rounds Lopez had the edge. In the tenth and final round Sanchez seemed to pull out the round. Referee was Celestino Ruiz.

In the first round Anderson bloodied the nose of Ibeh. In the sixth and final round Anderson had the nose and mouth of Ibeh bleeding. A left hook from Anderson on the chin and down went Ibeh for good. No need for a count from the referee. 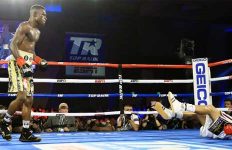