No. 1 ranked Carlos Adames and No. 2 ranked Patrick Teixeira battled for the interim WBO World Super Welterweight title fight with the vacating of the title by Jaime Munguia moving up to 160 with Teixeira won a deserving decision.

In the first round it was competitive with Adames getting an edge being the aggressor of the two. In the second round Teixeira used his reach well landing a low one that referee Robert Byrd missed. Adames walked into a lead left uppercut from Teixeira on the chin. Adames kept coming forward while Teixeria outworks him.

In the third round Adames started coming on putting pressure on Teixeira driving him against the ropes with half a minute left in the round. In the fourth round in the final minute Adames put Teixeira against the ropes cutting him outside of the left eye.

In the fifth round Adames is chasing Teixeira all over the ring opening another cut under the right eye. Both are throwing punches at a high rate. The fight got furious the last thirty seconds from both fighters with Teixeira ending well. In the sixth round the furious pace from both continued with Teixeria going to the body and Adames to the head. Teixeira’s face is bloody from both cuts. Adames seems to be loading up while Teixeira is the busier of the two.

In the seventh round Adames kept the pressure on and by the final minute had Teixeira on the run trying to hold Adames off with a jab. In the final half minute Adames landed a pair of solid uppercuts to the chin. Teixeira had Adames hurt with a left cross and down inside of the final ten seconds. He beat the count and was out on his feet as referee Byrd asked him to step forward and looked like he might stop the fight. Adames was fortunate to get thru the round.

In the eighth round Teixeria drove Adames into a corner until a pair of rights from Adames moved him back. Both fighters with a little over a minute left in the round landed rights to the chin at the same time. Teixeira’s face is a mask of blood. What a round!

In the eleventh round Teixeira seemed to have Adames confused by a flurry of punches. Adames halfway thru the round was swinging wildly and missing. In the final half minute Teixeira was landing 3-punch and 2-punch combinations to the head of Adames.

In the twelfth and final round Teixeira landed half a dozen unanswered punches at the end of the first minute of the round. Teixeira dominated for the most part of the final round.

In the first round Lopez used a good jab from the start until Valdez went to the body of Lopez halfway thru the round. Valdez took the round. In the second round Valdez stalked Lopez until he got hit with a 3-punch combination to the head. With a minute left in the round a solid left uppercut from Lopez on the chin of Valdez knocked him down for an 8-count by referee Russell Mora. He was able to get thru the round.

In the third round Valdez came forward as Lopez was landing a good jab to the chin. Lopez was outlanding Valdez but got caught with a good left hook from Valdez when he dropped his right hand. In the fourth round Valdez kept stalking and halfway thru the round landed a solid right cross to the chin of Lopez. In the final thirty seconds of the round Lopez landed a double jab followed by a right all on the chin of Valdez.

In the sixth round it was Lopez stalking Valdez up until the final minute of the round landing an effective jab. In the seventh round Valdez is trying to cut off the ring and caught up to Lopez halfway thru the round landing a big left hook to the chin dropping Lopez for an 8-count from referee Russell Mora. In the final thirty seconds Valdez landed half a dozen unanswered punches when referee Mora suddenly stopped the fight which may have been prematurely.

“This kid was a warrior like his father. I think my experience may have been the difference I want to fight WBC champ Miguel Berchelt at 130 who has been a great champ,” said Valdez.

“I thought the fight was stopped too soon and thought I was ahead in the fight (which was confirmed he was), and am a featherweight not a super feather and would like a rematch. I will fight anyone at 126,” said Lopez.

In the first round after almost a year since his last fight it was all Frampton in the first minute of the round. He continued to outwork McCreary the rest of the way in the round. In the second round Frampton continued landing good body shots outworking the much less experienced McCreary. Frampton landed a lead right to the chin of McCreary getting his attention.

In the fifth round after taking an “ear beating” in between rounds McCreary came out landing body shots until Frampton fired back with a body shot halfway thru the round that hurt McCreary. In the sixth round a vicious right and left to the body from Frampton, and McCreary dropped for a 9-count by referee Kenny Baylis a minute into the round.

In the seventh round McCreary came out firing after another “ear beating” in the corner. Frampton using the ring well before coming in at McCreary. He walked McCreary into a corner without throwing a punch. Frampton ended the round with a pair of rights to the chin of McCreary.

In the ninth round Frampton worked the body. McCreary was warned for a low punch. Halfway thru the round a double left hook to the body (liver) and down went McCreary up at 7. McCreary was up but holding on. Frampton stalked him with body shots.

In the tenth and final round a low left from Frampton allowed McCreary a minute rest by referee Baylis. McCreary in the final minute landed body shots hurting Frampton who moved around the ring avoiding McCreary until the final thirty seconds before landing punches. It was an outstanding performance by Frampton.

All scorecards plus this writer’s was 100-88. “I hurt my hand in the second round and look forward to a chance to fight (WBO 130 Champ) Jamel Herring,” said Frampton. Both Herring and Frampton met in the ring after the bout shaking hands.

In the first round Barboza was pressing the action landing right uppercuts. Silva moving up from 135 got in his licks in a good round won by Barboza. In the second round Barboza landed an overhand left to the chin of Silva rocking him a minute into the round.

In the third round Barboza dropped Silva a delayed right on the chin who barely beat the count of 8 by referee Jay Nady. Silva got up throwing punches getting thru the round. In the fourth round Barboza landed well with rights following his jab to the chin of Silva. Silva has been a tough opponent but Mendoza stays a bit ahead of him in punches landed.

In the fifth round a right to the rib cage from Barboza and Silva went down doubling over for the entire count of referee Jay Nady.

In the first round Mendoza stayed one punch ahead of Gomez for the most part. Mendoz drove Gomez into the ropes with a left hook halfway thru the round. Both fighters had red marks by the end of the round.

In the second round Gomez had his mouthpiece knocked out in the opening seconds of the round. Gomez showed a good left hook though Mendoza shows more power in his punches. Near the end of the round the mouthpiece of Gomez was dropped out again without a punch landed. Referee Robert Byrd warned Gomez between rounds about the mouthpiece coming out.

In the third round both had their moments. Gomez finished strong with a left hook to the chin of Mendoza. The swelling started outside of Mendoza’s left eye being attended to between rounds. In the fourth round Mendoza into the second minute of the round landed a hard right lead to the chin of Gomez. Gomez continued stalking Mendoza for the most part. Mendoza was warned by referee Byrd for a low blow. In the final minute Mendoza missed a lead right uppercut while Gomez countered with a right on the chin. It was a good round for Gomez.

In the fifth round Mendoza was bleeding from his lower lip. Gomez was landing rights to the face of Mendoza. Gomez landed a crushing right to the chin of Mendoza at the bell. Another good round for Gomez. In the sixth round Mendoza bounced back well landing rights as Gomez was coming in. Inspite of blood from his lip and a small cut now outside of his right eye Mendoza landed the harder punches of the two.

In the seventh round both fighters landed hard shots to the head. Gomez had Mendoza against the ropes for a good portion of the round. Mendoza ended the round with a lead right to the chin in a close round.

In the eighth and final round the fireworks continued from both fighters. Halfway thru the round Gomez landed a solid left hook on the chin of Mendoza who has slowed down possibly due to the loss of blood. The nearby Utah fans are ytelling “Larry, Larry” as the round was nearing the end of a brawl. Both fighters hit gloves together smiling. What a fight!

In the first round both felt one another out when Madison ducked into a right from Vianello behind the ear and down went Madison on his knees taking the full count from referee Jay Nady.

In the first round after a minute of Zayas dominating a right cross from Zayas on the chin of Windfield and down he went taking an 8-count from referee Russell Mora. Seconds later a left hook to the right arm of Windfield moved him back a step but a right cross to the head from Zayas and down went Windfield again forcing referee Mora to wisely call a halt.

Zayas is the youngest boxer signed by Bob Arum’s Top Rank at 17. 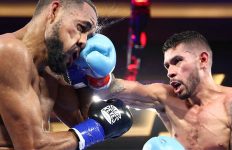 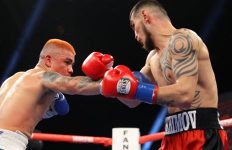