Hard Hitting Promotions and Live Nation put on “Friday Night Boxing” at the MET in Philly before a packed house! Promoter Will Ruiz and matchmaker Manny Rivera brought boxing back to Broad Street in Philly Saturday night for the first time since 1954 at the MET!

In the Main Event southpaw Jeremy “King” Cuevas, 11-1(8), of South Philly, lost for the first time, to Steven Ortiz, 10-0 (3), of North Philly, for the vacant PA State Lightweight Title with Ortiz scoring a pair of knockdowns over 8 rounds. For some reason after easily winning the first round having Ortiz chasing him Cuevas decided to stand in front of him the rest of the fight playing right in the hands of Ortiz. This writer does not approve of Philly against Philly especially early in the careers of these to unbeaten boxers.

In the first round Cuevas used the ring well while Ortiz couldn’t catch him and got caught with a right hook that put him into a squat position but Cuevas didn’t capitalize on it. In the second round Cuevas stood his ground landing a left uppercut knocking the head of Ortiz ack. Ortiz continues missing wide rights. Ortiz landed a vicious left hook on the chin dropping Cuevas in the final seconds of the round. He beat the count of referee Sean Clark but was seriously hurt.

In the third round Ortiz landed a 3-punch combination to the head hurting Cuevas. Cuevas should have continued moving as he did in the first round having Ortiz come to him instead of standing his ground fighting Ortiz’s fight.

In the fourth round Ortiz landed a good left hook to the chin of Cuevas who continued standing in front of him. Cuevas ended the round with a lead left to the mid-section of Ortiz. In the fifth round Cuevas landed a straight left on the chin of Ortiz getting his attention. Ortiz missed a combination and they ran several steps away from Cuevas.

In the sixth round Cuevas continued to make the taller Ortiz miss. Ortiz landed a left hook to the chin. Ortiz landed another left hook to the chin rocking Cuevas. Cuevas came back making Ortiz avoid him moving away several steps. In the seventh round Ortiz warned for using his elbow by referee Clark. Cuevas hurt Ortiz with a left to the chin. A right on the chin from Ortiz dropped Cuevas who was winning the round seconds before the bell.

In the eighth and final round both landed on the chin at the same time. Cuevas knowing he needed a knockout had to take more chances in the final round needing a knockout. Ortiz landed several rights to the chin. Cuevas fought Ortiz’s fight from the second round on which was not his fight.

Scores were James Kinney 79-71, Dewey LaRosa and John McNair 78-72 while this writer had it 77-73. What was frustrating for the press is the Boxing Director will not allow us to talk to the boxers. Well known writer Bernard Fernandez who wrote for the Philly papers threatened never to attend another fight when he was refused admission to the dressing rooms to talk to the boxers. This writer confronted Commissioner Rudy Battles after the event asking why he allows the Director to keep the press away. I also asked how can a boxer from New York come to PA and win a State Title. He had no answers for both problems. Commissioner Rick Steigerwald in Western PA doesn’t allow this to happen in his territory. That’s the way Philly boxing should be but isn’t.

In the co-feature NABA-USA champion Welterweight Malik “Iceman” Hawkins, 14-0 (9), of Baltimore, MD, won a wild brawl over Gledwin “Chico” Ortiz, 6-3 (5), of the Bronx, NY over 8 rounds of action! The fan’s weren’t happy with the wide scoring of the judges nor was this writer.

In the third round Hawkins landed half a dozen unanswered punches mainly to the head of Ortiz. Ortiz came back with half a dozen punches of his own. The difference here is Hawkins knew how to slip a punch and Ortiz didn’t. Ortiz rocked Hawkins with several rights to the chin. The fans loved the action!

In the fourth round Ortiz worked the body of Hawkins with left and right uppercuts. Ortiz landed a double left hook to the body. Hawkins came right back with a hard right cross to the chin. Both fighters were throwing bombs right up to the bell.

In the fifth round they picked up where they left off in the previous round throwing punches with bad intentions. Ortiz rocked Hawkins with a right cross on the chin. Ortiz landed a double right to the chin of Hawkins who came back with a flurry of punches.

In the sixth round Hawkins landed four punches until Ortiz came back with a hard right on the chin. Hawkins backed Ortiz to the ropes but got hit with several uppercuts. The difference once again was Hawkins know how to slip a punch. If he didn’t it might have been over.

In the eighth and final round Rosa came out using a jab followed by a right hand driving Hawkins against the ropes. Ortiz drove Hawkins into a corner with a flurry of punches until getting rocked with a counter left hook to the chin by Hawkins. Ortiz landed rights to the body and chin. Ortiz rocked Hawkins with a right cross to the chin.

This was one of the best fights this writer has seen in Philly in some time! A rematch in a main event would be a natural draw.

Scores Lynne Carter 77-75, John McNair 78-74 and James Kinney 79-73 while this writer had it 76-76 and it deserves a rematch. There should not have been a loser in this one! Eric Dali was the referee.

Lightweight Samuel “Tsunami” Teah, 15-3-1 (7), of Liberia, and Philly, was dominated by southpaw Tre’Sean Wiggins, 11-4-1 (6), of Newburgh, NY, for the vacant PA State Lightweight Title. Wiggins being from NY should have never been qualified to fight in another state for a title fight!

In the first round Wiggins landed several straight lefts to the chin of Teah. Wiggins knocked Teah down but it was ruled the punch was behind the head by referee Dali ruling it a no knockdown. In the second round Wiggins continued landing lead left hands on the chin of Teah who was only been able to land several jabs. Teah looked like he never fought a southpaw before.

In the third round Teah was warned for a low blow by referee Dali twice. Teah was having problems with the southpaw while charging in and getting caught with left hands. In the fourth round Teah walked into a left on the chin. Teah was warned for hitting behind the head. In the fifth round Wiggins continued landing with the lead left on the chin of a bewildered Teah. Teah missed an overhand right and did a 360 almost falling to the canvas.

In the sixth round Teah came in with hands high walking in low getting hit with a left on the chin from Wiggins. Wiggins landed a left to the chin knocking Teah back several steps. Teah landed a left hook while inside to the body. In the seventh round a lead Wiggins left rocked a frustrated Teah. Teah just couldn’t seem to get out of his own way.

In the eighth and final round Teah continues missing wild rights and was warned for rushing in with his head. Teah landed several punches to the body but it wasn’t going to lead to a knockout which Teah by this time needed. Wiggins completely dominated this fight and is from New York yet the PA Commission sanctioned it a PA title bout. Why?

Super lightweight and good prospect Branden “The Gift” Pizarro, 14-1 (7), of North Philly Bad Lands, was impressive in knocking out Zack Ramsey, 8-6 (4), of Hartford, CT, at 1:15 of the first round. Ramsey had lost his last four fights losing to Teah and Philly’s Ray “Tito” Serrano.

In the first round Pizarro landed a wicked left hook to the side of Ramsey dumping him on the seat of his trunks for the 8-count of referee Clark. Pizarro jumped all over Ramsey switching to southpaw knocking him out with a left uppercut on the chin.

Working Pizarro’s corner is his father and trainer and well respected Angel Pizarro Sr. His son is only 19 as shows a lot of promise.

In the first round Rosa landed left hooks to the body of Santos. Rosa worked the body with rights following with left hooks to the chin of Santos. In the second round Rosa rocked Santos with a right cross to the chin. Seconds later a Rosa left hook on the chin dropped Santos. Rosa went right on the attack having Santos stumbling around the ring until referee Dali wisely called a halt.

For some reason both Pizarro and Rosa were introduced as Continental Americas champions but it doesn’t show this on www.boxrec.com.

Super featherweight Christian Tapia, 8-0 (7), of PR and Camden, NJ, stopped David Veras Pena, 0-2-1 (0), of PR and Odenton, MD, at 1:28 of the second round in a mismatch scheduled for 4. This is a bout the commission should never have allowed based on their records and the results proved that.

In the first round Tapia hurt Pena with a right to the body. Tapia landed countless punches without return from the taller Pena. In the second round Tapia rocked Pena with rights to the chin. Another right uppercut at the end of a flurry of punches had Pena out on his feet when referee Franciosi wisely stopped the mismatch.

In the third round Rodriguez missed with a right and got countered with a right to the chin by Lopez. Lopez continued out working Rodriguez. In the fourth and final round Lopez had Rodriguez holding before getting warned for hitting behind the head. In the second half of the round both boxers let it all hang out to the delight of the fans!

In the third round the boxers mostly landed jabs with Dulin outlanding Israeli. In the fourth and final round Dulin landed several lead rights to the chin of Israeli in another close round.

Light heavyweight Bennie “The Bulldog” Sinakin, 3-0 (2), of South Philly, knocked out Ronald Lawrence, 0-4 (0), of Philly, at 2:42 of the first round. “The Bulldog” had many fans cheering for him from start to finish.

In the first round Lawrence landed a chopping right to the head. Sinakin charged into Lawrence working the body following up with an overhand right having Lawrence hurt and holding on. Sinakin went right after Lawrence again dropping him with a right on the chin. Lawrence tried beating the count of referee Dali but didn’t quite make it.

Bantamweight Josue Rosa, 1-0 (1), of Philly, defeated Willie Anderson, 0-2 (0), of Paulsboro, NJ, RSC. A hand injury was suspected but the ring announcer left us in the dark with this ending.

In the first round a right from the much taller Anderson buckled the knees of Rosa twice. In between rounds the ring physician was brought in checking the left hand of Anderson who couldn’t continue. Dave Franciosi was the referee. 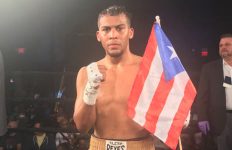