In the first two rounds Teah started fast with Lee coming back. In the third round a short right from Lee on the side of the head dropped Teah for an 8-count. Lee was all over Teah who landed a left but got countered by a vicious overhand right on the chin knocking Teach down and out. It was the first time Teah was stopped.

In the first round Ortiz dominated with his jab. In the second round Ortiz stunned Hill with a left hook inside the first minute causing swelling under the left eye of Hill. In the next two rounds Ortiz continued winning with his jab.

In the fifth and sixth rounds Hill being behind was more aggressive taking the rounds. In the seventh round Ortiz came back well. In the eighth and final round it could have gone either way with Ortiz an overall winner.

Scores were McKaie 79-73 with Trella and Carusone 77-75 and this writer 78-74. Referee was Danny Schiavone. Trainer for Ortiz was Raul “Chino” Rivas.

In the first round a hard right on the chin from Norman hurt Whitaker. In the fifth round a combination from Norman dropped Whitaker ending the fight.

In the first round at the halfway point a right from Velasquez on the ribs of Padilla dropped him for an 8-count. Velasquez outworked Padilla in the next two rounds. In the fourth round Padilla seemed to outland Velasquez to take the round.

In the fifth round a right hook on the chin hurt Velasquez ending with a left on the chin of Velasquez dropping him for an 8-count. Upon rising Padilla was all over Velasquez who tried holding on out on his feet but had his hands up when referee Danny Schiavone stepped in to call a halt. There was no complaint from Velasquez. Velasquez was ahead on all 3 cards. Trainer for Padilla was Rashiem Jefferson. 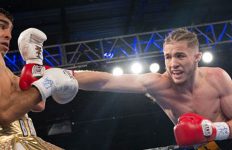