At the Showboat Hotel & Casino Saturday before a standing room only night Hard Hitting Promotions – Will Ruiz and Matchmaker – Manny Rivera, over FloSports, started their first monthly promotions for the next year in another evenly matched spirited event! In the Main Event Puerto Rico’s Christian Tapia knocked out Mason Menard of Rayne, Louisiana, in the second round for the vacant NABA Super Featherweight title. Tapia has won his last 7 fights via stoppage. In the co-feature unbeaten Super Flyweight Dylan “Real Dyl” Price improved his unbeaten winning streak of 14 in a row defeating Edwin Rodriguez of Puerto Rico over 8 exciting rounds.

In the first round both fighters gave the fans plentiy to cheer about with Tapia having an edge. In the second round a right uppercut from Tapia on the chin and down face first to the canvas as referee Allen Huggins counted him out.

In the first two rounds it went back and forth with each taking a round. In the third round Price outworked Rodriguez. In the next four rounds Price held an edge of an exciting match. In the eighth and final round both fighters continued to give the fans their monies worth!

In the first three rounds Young had the taller Manuel against the ropes for the most part chasing him down. In the fourth and fifth rounds Manuel came back to take a close round with Young spending too much time in the corner.

In the sixth round Young ended the round with a solid right to the chin of Manuel. In the eighth and final round Young scored a knockdown with a flurry of punches with referee Sparkle Lee giving an 8-count. For some reason Young never followed up allowing Manuel not only to survive but to take the remaining round and come close to scoring a knockdown due to Young being against the ropes slipping punches.

In the first three rounds both did too much holding for referee David Franciosi. In the fourth round due to a cut over the left eye of Carabello from an accidental clash of heads referee Franciosi called a halt. Due to not completing four rounds the match was declared a no-contest.

In the first round Conquest landed a lead left to the jaw rocking Garriga at the halfway mark. In the second through the fifth both fighters fought on even terms. In the sixth and final round Conquest seemed to pull out the win. Referee was David Franciosi.

In the first round both fighters had the fans on their feet by the last 30 seconds of the round with Wise going to the body. In the second round the war continued with defense thrown out the window. Each won a round. In the third and fourth rounds the action continued back and forth in this slugfest.

In the fifth round Wise rocked Solis with a right uppercut in the final seconds. In the sixth and final round they were slugging it out after the bell to the delight of the crowd. Referee was Eddie Claudio. 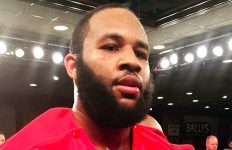