Tickets for the live event, which is promoted by Ringstar Sports and TGB Promotions, begin at $50, plus applicable fees, and are on sale now. To purchase tickets, visit AXS.com.

Here is what Garcia, his brother and trainer Robert Garcia and Ringstar Sports Chairman and CEO Richard Schaefer had to say ahead of Garcia’s first title unification fight:

“It’s been seven years since I last had the chance to fight here in LA, and that was even before I was champion. Now after all of my accomplishments, I get to come home and put on a unification match for my local fans.

“Every time I walk into the ring, there’s a moment where I get butterflies and feel the emotions from the fans. This time it’s with my hometown fans and that’s really special. I’m really looking forward to it because I know the fans are going to show up and show their love and support.

“I think I’m in my prime right now. I’m in the best shape physically and mentally that I’ve ever been in. I need to take advantage of the moment right now and take on the biggest challenges. I want to give the fans fights to remember. Those are the fights that excite me the most.

“I know Easter is very tall and has a longer reach than me. In the gym, we’ve been working on sparring partners who present different challenges and made adjustments from there. I have to catch him reaching in or put pressure and work my way inside. There are different things that I’m capable of doing.

“I’m pretty experienced from fighting taller guys in the past, so I don’t think it’s going to make too huge a difference. It’s a disadvantage on paper, but once fight night comes, I’ll be ready.

“This is a big fight for me and I’m sure it’s the biggest fight of Easter’s career so far. I’m glad to hear he’s training extra hard. It shows me that he’s motivated and hungry to show off his very best, just like I am.

“This is my natural weight and so far everything in camp has been smooth. The weight started coming off right away and now just restricting the diet enough so we get to where we want to be.”

“We know that Robert Easter is training like never before to be ready for this fight against Mikey. He has a huge reach advantage, so we know he’s going to come in and use that. He has a new trainer [Kevin Cunningham] who is going to try make us box with him.

“We don’t listen at any criticism of Easter for having close decisions in his last couple of fights. We know that Easter is going to come in having trained like never before. It’s going to be the best Robert Easter Jr. possible on fight night.

“Mikey fighting at home in front of his hometown fans is huge for us. We know that there’s extra pressure that comes with it, but everything we’ve done together so far in his career has prepared him for it. I’m confident it’s going to bring out the best in him.”

“We have to use our experience advantage. Mikey has fought the better competition, but Easter is a young guy who wants to take Mikey’s spot. Mikey is very smart, so he’s going to look for the right punch to do damage.”

“Mikey Garcia has the opportunity to dominate at 135 and 140-pounds, plus he even wants to move up in weight and challenge himself against the best at 147-pounds. It shows the character and strength of Mikey Garcia. No challenge is too big for him.

“Whenever Mikey Garcia fights, it is must-see TV. He’s as good as it gets in the sport. This challenge against Robert Easter Jr. is the kind of fight that can turn you into a boxing fan. This is going to be a barnburner. They say that styles make fights and these two styles are made for each other.

“There was always somebody who carried the sport of boxing who was in Los Angeles, but right now there isn’t. Mikey is coming to fill that void. To have Mikey back at STAPLES Center is a perfect pairing of fighter and arena. STAPLES Center tends to bring out the best in fighters and that’s sure to happen again on July 28.” 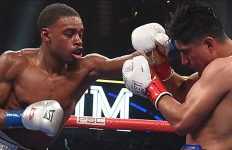