The overall landscape in boxing today is a very healthy one. The three glory divisions in the sport have always been welterweight, middleweight and heavyweight. Those divisions are all currently stacked with talent and intriguing matchups. Other divisions such as light heavyweight and junior middleweight are thriving today as well. Of all those flourishing weight classes the one that may prove to garner the most interest in the very near future is lightweight. The Prince of the 135 pounders is Vasiliy Lomachenko. He is the owner of 3 of the 4 major world titles after recently picking up the vacant WBC strap with his victory over a talented and gutsy 2012 Olympic gold medalist in Luke Campbell. The lone title not attached to Lomachenko belongs to power- punching Richard Commey. The Ghana born , Bronx transplanted Commey has defended his IBF title twice and has a very attractive matchup set to take place later this year against Brooklyn’s undefeated Teofimo Lopez. Commey-Lopez is an interesting one as Commey is a heavy hitter who has stopped 26 of 29 opponents against only two back to back split decision losses in 2016. Lopez has stopped 11 of his 14 opponents, at just 22 years of age and with limited professional experience under his belt is taking a high risk , high reward title fight a little earlier then a lot of people would expect. Logic would dictate the winner of this fight will then step into the ring with Loma for all of the marbles but in boxing what makes the most sense, doesn’t always happen. On this rare occasion, that may prove to be a good thing.

The winner of Commey-Lopez pretty much cements who will be considered the second best in the world at 135 pounds. As that fight approaches a swarm of challengers with great potential will be lining up for a crack at Loma or Commey/Lopez. Former 130 pound WBA and IBF champion Gervonta Davis is moving up to lightweight and immediately becomes a major player in the division. The undefeated 24 year old won’t want to be with out a strap for long as titles equal dollars. Boxing fans have long salivated over a fight between Loma and Davis, with Davis’s arrival at lightweight that becomes far more of a reality in the near future. Expect Davis to have one “welcome to your new division” fight before eyeing the Commey-Lopez winner. Don’t be to surprised if 130 pound WBC champion Miguel Berchelt follows Davis to lightweight after his next title defense in November as well. The lightweight division will have far more opportunities for Berchelt who is entering the prime years of his career then he currently has a Jr. Lightweight.

Twenty year old Devin Haney picked up the trinket know as the” Interim” WBC Lightweight title ten days ago with his 4th round stoppage over Zaur Abdullaev. It’s an amazing thing when the WBC can crown Lomachenko their champion on August 31st and less then two weeks later they can maintain a straight face awarding an interim version of that same title to Haney but no one ever claimed the powers that be had integrity. The blame shouldn’t go to the fighter as a belt makes you more marketable and it helped sell his last fight at Madison Square Garden but no one is mistaking Haney for a world champion, not yet at least. In his post fight interview Haney called out Loma for a fight and seemed to legitimately mean it which tells me that he wants to truly earn the distinction of being called a world champion. This is a kid with a huge upside and talent to spare. He has been moved quickly and already has his 4th fight of 2019 lined up for November which will be his 24th time stepping into the ring since turning pro in December of 2015. All of those fights in a short duration of time has given the undefeated Haney a calm, composed and calculated demeanor inside the ropes. Haney has shown a maturity beyond his years and in time might be the man to eventually unseat Loma.

The before mentioned Luke Campbell turned in a very solid effort against Lomachenko last month. Campbell came into the bout a worthy challenger to Loma’s throne. Styles make fights and the combination of Campbell’s pedigree, physical advantages, awkward style and home field advantage made this fight an interesting one… and it was just that. Campbell fought far better than the scorecards reflected and gave Loma a serious challenge in a skillful and gutsy effort. Expect Campbell will be back in the mix of things after his outing in August against Lomachenko .Campbell is a very solid world class fighter who is still young. Stylistically he matches up well with anyone in the lightweight division and proved as much after fighting so well with the man who many consider the best pound for pound fighter in the world. Campbell may only be a couple of victories away from a rematch with Loma and after the entertainment both men provided in London a rematch wouldn’t be a tough sell down the road . Campbell still has a bright future in the sport and his stock only went up in defeat.

We also have Ryan Garcia who turned 21 years old last month and just signed a long term deal with Golden Boy Promotions. The 18-0 prospect is already selling out ten thousand seat venues in California and has a very big fan base. He returns to the ring November 2nd fighting on his biggest stage yet when he takes on 20-1 Romero Duno in the co main event to Canelo Alvarez- Sergey Kovalev. Garcia looks like the real thing combining blazing hand speed with creative combinations and punch diversity. He also does it with power. Duno has scored 16 KOS in his 20 wins representing Garcia’s biggest challenge to date and this fight will tell us a lot about Garcia as Duno is a very serious, young prospect in his own right.

Other Lightweights such as former champions Robert Easter Jr, Javier Fortuna ,Rances Barthelemy and Yuriokis Gamboa could prove to be very good challenges for some of the divisions young up and coming talent and provide stiff test’s that they will need to pass in order to graduate to the next level.

The one wildcard in the division may be a former multi division champion and pound for pound top ten fighter Mikey Garcia. His voyage at the lightweight division was a short lived one, consisting of only two fights. The first was a second round KO over Dejan Zlaticanin for the WBC title in Jan 2017. After that victory Garcia moved up to Jr. Welter with back to back victories over Adrien Broner and Sergey Lipinets. Mikey then dropped back down to Lightweight defeating the before mentioned Easter JR. in a unification fight in July of 2018 before biting off more then he could chew jumping up two weight classes to challenge Errol Spence for the Welterweight title. Garcia was paid handsomely for taking such risk in the form of 3 million dollars but turned in a very lackluster effort. Garcia is undersized at 147 pounds and would be well served to drop back down in weight. The fight with Spence was in March of this year so Mikey is about due to announce his future plans and with all the traffic and happenings at Lightweight the 31 year old Garcia might just end up there.

Lomachenko is the man to beat in the division and one would assume at only 31 years of age he has many good years ahead of him. Once you factor in that Loma has had 397 amateur bouts, 15 professional ones and all on a world class level that assumption loses some clarity. Loma has been fighting and training at an elite level for a long time. He won the first of two Olympic gold medals in 2008. Loma had his first amateur boxing match at just 9 years old before his father turned him to folkdance to perfect his rhythm and balance. The move clearly paid off. Throughout his career he has exhibited footwork and angles blended with non stop perpetual motion that has never been seen before. He has a unique and befuddling style and the intelligence to quickly figure out an opponent. He has been dominant through out a professional career that started at 126 pounds where he won his first world title. He was just as dominate at 130 pounds where he won his second. At 135 pounds — where he has fought 4 times and won 3 word titles — Loma might be punching a tad above his weight. At the very least, 135 pounds is his ceiling. He has been met with a resistance at lightweight in three of his four outings. In contrast, at 130 pounds, none of his five opponents made it past the 9th round. Before moving to lightweight, Lomachenko held the incredible distinction of making his last four foes quit on the stool or have their corner waive the white flag for them. An incredible feat. More incredible when factoring in that those opponents had a combined 88-3 record. Simply put, at 135 pounds, Loma has looked human. He was dropped for the first time in his career against Jorge Linares in his lightweight debut before stopping Linares to the body in round 10. That was belt number one at lightweight. In Loma’s other two title winning efforts at 135 — against Jose Pedraza and Luke Campbell — Loma settled for 12-round decision victories in fights were he could not break his opponents will.

Lomachenko now has plenty on his plate to keep busy for the next couple of years at Lightweight as he will have no shortage of challengers. Something he was lacking at Jr. Lightweight. For now, Loma is still operating on another level. The combination of a 397 fight, 396 win, 2 Olympic gold medal amateur career coupled with winning 5 world titles in 3 different weight classes in his first 15 fights as a professional illustrates just that. He is not as dominating a force at 135 pounds as he was at 130. It could just be the weight class as he has to work that much harder and smarter to deplete his opponents who are bigger and more durable. In turn the size advantages that Loma’s opposition enjoys over him mean that their punches are that much more affective. It could be the wear and tear of 22 years of boxing beginning to creep up on him. It could be that the talent at 135 pounds far exceeds the talent at 130 or a combination of all 3. One thing is for certain and that’s father time will continue to creep up on this 412 fight veteran of the sport and just as the younger talent continues to mature, that’s when things will get very interesting. 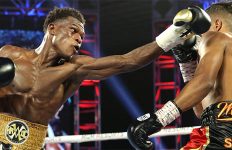