Former world champion Bernard “The Executioner” Hopkins always talks about doing prison time only at Graterford Prison in PA. He and his Uncle Artie “Moose” McCloud both were champions at Camp Hill Prison in Harrisburg, PA.

McCloud came out of prison and had an exhibition with middleweight contender Curtis Parker and handled Parker with ease. He turned professional in September of 1977 and defeated Fred Brown 5-0 in VA. The following month at the legendary Blue Horizon he defeated Frank “The Animal” Fletcher, 3-0. Fletcher just got out of prison this year.

In McCloud’s third fight he lost to four time All Navy Champion Keith Broom, 6-0, of DC, in April of 1978. He came back in 1980 and scored knockouts in Philadelphia, Atlantic City and Las Vegas. He then stopped Don Lee, 13-0, in Chicago in December of 1982. In March of 1983 in Atlantic City he won a split decision over Allen Alexander 5-1. Two knockouts followed in Las Vegas and Atlantic City.

In McCloud’s eleventh fight he lost for the second time losing a split decision to Marcus Jackson, 10-4, in Atlantic City. In January of 1985 he stopped Mike Fisher, 10-5, who two fights prior to this stopped Chris Swenke, 16-1-1, in Las Vegas.

McCloud didn’t fight again until June of 1986 when he knocked out Donald Smith, 6-0, in Atlantic City. The following month started a three fight losing streak losing to Eric Holley, 14-1. He came back three years later losing to Otis Grant, 7-0, and Keith Providence almost three years later who was 8-1-1.

So you can see McCloud who ended up 11-5 (8), had an up and down career that could have been something but prison time can do that to some fighters. His nephew Hopkins was an exception and only in December of 2016 losing to Joe Smith in two months before his 52nd birthday. He ended up 55-8-2 (32). Not bad huh? 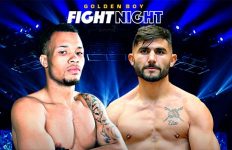