My Time at the Atlantic City Boxing Hall of Fame (Side Note to Ken Hissner’s Story)
By David R. Ruff

I thought the whole event was great.  It lasted for four days.  Ken Hissner and I were there for the last day, which was induction day.  I thought all the inductees did great in speaking.  What caught my attention the most were the speeches by former heavyweight champion of the world Timmy Witherspoon, contender Mickey Ward, and former five-time champion Bernard Hopkins.  Witherspoon’s speech, talking about developing a boxers’, trainers’, and managers’ pension, caught my attention the most.  Several have tried, but I think Witherspoon might make it.  He’s very much a people person and a long-time friend of mine.  Too many boxers, trainers, and managers go without anything at the end.  Let’s hope Tim can make it happen.

Mickey Ward’s speech also caught my attention.  He said his family and friends had more fights on the bus coming down than he had in the ring.  Ward was a pretty tough hombre; he talked about the ups and downs of his career.  He’s the step-brother of former boxer Dickie Euklund.

Last but not least, Bernard Hopkins caught my eye with another story—about his being incarcerated at a young age.  Prison is where he learned his trade as a boxer, through many different mentors.  He always wanted to do right for his mother, which at the end he did.

This was a memorable night, with these speeches.  In the hallway the legendary Roberto Duran shook my hand after he was inducted.  I’d like to thank Tim Witherspoon, Aaron Snowell, Ken Hissner, and Craig Houk for taking the time to take the photograph. 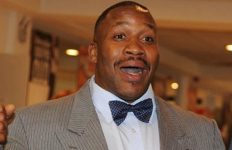