At the Claridge Hotel & Casino, in Atlantic City, NJ, Friday night Rising Star Promotion and Roc Nation put on a 9 bout card before a full house.

Young used a good body attack to defeat the always coming forth Flores. Young can be too “mechanical” and upright or he might have more power. He easily defeated the veteran who was originally scheduled to meet Lamanna.

Super Welterweight Thomas “Cornflake” Lamanna, 21-1 (9), of Millville, NJ, stopped Engelberto Valenzuela, 10-8 (3), Sonora, MEX, at 2:17 of the first round. Referee Harvey Dock stopped it after a dozen punches finally dropped Valenzuela in his own corner.

Lamanna is scheduled to fight “Dusty”

In the opening round it was all Meng a former top amateur this writer saw for Team China against Team America several years ago. In the second round Meng had Judah’s nose bleeding. It was a better round for Judah but not good enough to win it. In the third round Meng had his way with Judah hurting him several times. In the fourth round Meng landed a perfect right hook to the chin of Judah and followed a left to the body.

In the fifth round Judah’s lead left fell short and Meng countered him with a combination. Meng hit Judah with another combination hanging him out to dry on the ropes out on his feet. Referee Dave Franciosi was wise to halt the fight at this point.

Meng is a prospect to watch being trained by Diego Rosario and managed by Dino Duva. Meng was easily the fighter of the night!

In opening bout Heavyweight two-time Olympian southpaw Zhilei “Big Bang” Zhang 11-0 (7), Zhoukou, CH, easily scored a win over tough Rodney “Raw Dog” Hernandez, 10-6-1 (2), Modesto, CA, after 6 of a scheduled 8 cut short after the fifth round by Commissioner Larry Hazzard. Zhang’s manager Dino Dennis was upset cutting the fight figuring his boxer would have stopped Hernandez within 8 rounds. It’s a wonder the ring physician allowed the fight to go on with the damage to the face of Hernandez who showed plenty of heart.

In the opening round the 6:06 Zhang towered over his opponent Hernandez who came rushing out at the bell but for the most part Zhang’s jab held him at bay. In the second round half a dozen punches from Zhang went unanswered with the last one a straight left causing a cut on the eye lid of the right eye of Hernandez. By the end of the round his nose was bleeding. In the third round both eyes of Hernandez were swelling shut with Zhang pin pointing his punches. In the fourth round Zhang continued to have his way until just before the bell Hernandez landed his best punch of the night a looping right to the chin of Zhang making him back up.

In the fifth round Zhang started using his right hook to the body while “Hernandez turned southpaw for the first time in the fight and nailed Zhang with a straight left to the jaw. It got Zhang’s attention but came back with an assault of punches.

In the opening round it was all Pasciolla who had Selby backing up the entire round but Selby landing the last punch of the round with a right to the jaw. In the second round Pasciolla drove Selby into a neutral corner with only the ropes preventing him from going down. Referee Ricky Gonzalez gave Pasciolla credit for a knockdown. In the third round Pasciolla hurt Selby several times. Selby is coming off a long lay-off and it shows.

In the fourth round it was all Pasciolla with Selby landing his best punch of the fight a left hook to the chin with seconds to go in the round with Pasciollo countering with a straight left to the chin. In the fifth round Selby continues to take a step back and Pasciolla steps in and lands a punch to the chin every time. Knowing he’s way behind and out of gas Selby is loading up for a right lead but it hasn’t come. In the sixth and final round Pasciolla continued to control the fight with his jab and an occasional straight left follow-up. At the bell Pasciolla had Selby trapped in a neutral corner on the defense.

Judges Constatino had it 59-54 while judges Stewart and Benoist both had it 60-53 as did this writer. “It felt good winning the rematch,” said Pasciolli. It was his only loss earlier in his career to Selby.

Johnson started the first round well with White taking over for the last minute of the round. In the second round Johnson moved well out of the reach of White but held when White got a couple of punches in. Johnson drew a warning at the end of the round for holding by referee Dock.

In the third round a left hook from Johnson dropped White who instantly got up and went after Johnson. Another left hook a minute later on the chin of White stopped him in his tracks. At the end of the round referee Dock once again came to the corner of Johnson warning him about holding. In the fourth and final round for the second time in the bout White showed his strength with both fighters arms locked raising Johnson up in the air with one hand. Johnson would move with White chasing and Johnson would stop and throw punches and immediately hold his opponent.

Bantamweight Christian Carto, 2-0 (2), Philadelphia, scored a pair of knockdowns in stopping southpaw Christopher Nelson 0-1 (0), Louisville, KY, at 0:51 of the third round.

In the opening round it was all Carto who stunned Nelson with a left hook to the head. Seconds later he dropped Nelson with a straight right to the chin. In the second round Carto opened up a cut outside the right eye of Nelson. Carto scored a knockdown as Nelson was falling forward he took Carto down with him. In the third round Carton landed a left hook and followed with a right to the chin of Nelson driving him across the ring and down. Upon getting up referee Franciosi halted the bout. Carto had a very successful amateur career.

“I didn’t know much about him but nailed him with a good right hand ending it,” said Carto.

In the opening round Holden landed 3 body shots driving Asmat back several steps. In the second round Asmat started using his jab in the final minute over the shorter Holden. In the final seconds of the round Holden went to the body with several shots making Asmat hold.

In the third round Holden lost his mouth piece twice and hit on a break twice being warned by referee Franciosi. Holden slipped to the canvas and Asmat tried hitting him when he was down but missed. Just before the bell Holden again hit on the break. In the fourth and final round Holden landed several left hooks to the body of Asmat.

Twice Asmat landed rights to the jaw of Holden who would come back with body shots. The fans were split on the decision but the judges were not with all three giving Holden a 39-37 win. A draw would not have hurt either boxer but Asmat looked more like the winner.

In the opening round it was all Smith but whenever Smith hurt Cain he would come right back. In the second round Smith used his reach to keep Cain on the defense. In round three Smith landed a dozen unanswered punches forcing Cain to hold on. In the fourth and final round landed a lead left to the chin of Cain. Cain came right back with a flurry of punches driving Smith against the ropes.Judges Benoist had it 40-35 while Stewart and Constatino had it 40-36 as did this writer.

A 10 count was given for the late PA & NJ BHOF writer Jack “KO” Obermayer. Matchmaker was Rene Aikin. 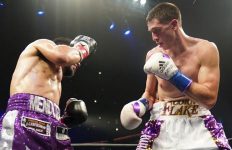