The Klitschko Brothers remain alive and spirited. On June 29, 2022, United States President Joe Biden attended a dinner of world leaders at the Prado Art Museum in Madrid, Spain, during which time President Biden had the occasion to meet and chat with former world heavyweight champions Wladimir Klitschko and mayor Vitali Klitschko, current mayor of Kyiv City, Ukraine. The Klitschkos also met with other world leaders.

The Klitschkos came to Madrid to request new Western financial assistance in Ukraine, during the ongoing Russian Special Forces operations invasion of parts of their country.

After a performance by the Kyiv Symphony Orchestra, the dinner served to world leaders consisted of: an appetizer of codfish with oranges and beetroot; lobster bisque soup flavored with olive oil and basil; a main course of slow-roasted lamb with lemon puree; and desert which featured strawberries in anis and violet caramel, along with a Spanish barquillo wafer biscuit.

President Biden’s visit was to announce the reinforcement of the United States military presence in Eastern Europe, including establishment of a permanent American command headquarters in Poland. On July 9, 2022, United States Secretary of State Anthony Blinken announced the United States is going provide 368 million dollars in new humanitarian and other aid to Ukraine immediately, including more rocket systems (meant for defense).

On July 12, 2022. The United States and the World Bank sent 1.7 billion dollars to Ukraine to pay the salaries of Ukraine’s health care workers, as well as provide funding for other essential services. This follows 40 billion dollars approved by the United States Congress on May 23, 2022, in aid for Ukraine, and other countries affected by the Russian-Ukrainian conflict. On the other side of the conflict, Russian President Vladimir Putin is set to meet with leaders in Turkey and Iran in Mid-July 2022, with Iran promising to sell and deliver new drones to the Russian Federation. Ukraine remains, in the eyes of the world, a nation in conflict in ongoing desperate need of financial, military and humanitarian assistance. 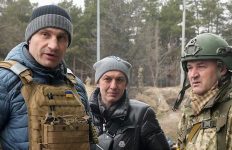