Browse: Home / 2022 / March / 16 / We Will Never Give Up! Says Vitali as He and Wladimir Klitschko Face Their Darkest Hour, As The Battle of Kiev Approaches

The Mayor of Kiev, Vitali Klitschko, the former world heavyweight champion, and his
brother, former world heavyweight champion Wladimir Klitschko, look like two battle
worn grizzled beard ghosts in the latest photo. The photograph in the New York Post
shows while both former boxing champions are still alive, they may be running out of time
as the capital city of Ukraine, Kiev, approaches its darkest hour, the doomsday moment
when the Russian Federation Military Forces attempt to conclude their special military
operation by destroying Kiev and its inhabitants. European leaders are currently in Kiev.

Missile strikes against civilian buildings and targets such as public buses have left Ukraine
virtually a sitting duck from the sky, unless Ukrainian Forces can stop incoming missiles
with counterattacks. Russia has the superior edge in manpower and weaponry, while
Ukraine has the edge in heart and soul, and international support, both financial and
volunteers. The Klitschko brothers worked their way through the rubble of the city they
and their families once called their home, bombed buildings and vehicles strewn. The
downed bus missile attack killed two people and injured nine others.

Every street (and) every house is being fortified (in preparation for the pending attack). Everyone is prepared to fight. (see the devastation of our infrastructure in images) That’s what Russia’s war against civilians looks like. A city bus just got hit by the rocket. Lives are getting lost. There’s the war that Russia started,” Vitali Klitschko stated in his personal view. In an interview with Al Jazeera, Vitali stated “We will never give up! I feel so bad, as every Ukrainian citizen, because nobody feels safe right now in Ukraine. The Russian propaganda … explains they target only military forces,” he said. “Today, we have pictures of [civilian] buildings where very peaceful people lived, which were destroyed. People died, many injured. Kyiv is not the first one (place). We have a lot of experience in the past couple of weeks with Russian aggression,” he said. Russia’s goal was to bring “panic to the city. We will never give up, we will fight. Russian (soldiers have) killed our children, destroyed our buildings, and destroyed our city. (Nonetheless) We’re ready to fight, and defend our city. Please, give us modern weapons, and we, by ourselves, will close the air above our heads.” 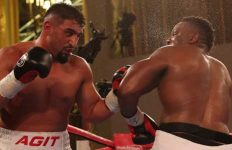