Pennsylvania boxing judge Bernard Bruni is in his 43rd year of officiating in 2021 having started in 1978 in the amateurs and 1993 in the pro ranks. He is a no-nonsense official who is all business during his bouts and all personality away from the ring. Above all he is a “man of God!”

On October 9th Bruni will be inducted into the Jerry Wolman Sports Hall of Fame of Pennsylvania. It’s being held at the Columbia Hose Fire Company Banquet Hall, 742 West Center St., Shenandoah, PA., at 6pm.

Bruni has officiated in some 645 bouts with 254 ending in stoppage, disqualification or no contest and he still gets paid no matter what! He has worked not only in Pennsylvania but in Florida, New York, Delaware, Illinois, Virginia, Connecticut and Maryland. He has worked in Canada four times.

Bruni is married to Felicia DiCasimirro, having been married since October 4, 1980. “Three things that people never thought would happen in 1980, Mt. St. Helens then erupted in Washington State, the Phillies won the World Series and I got married,” said Bruni. They have daughters Cara Sanfilippo married to husband Pete who have four children here and one in heaven. His other daughter is Maria Schulz married to James. “First of all I want to thank God for nothing is possible without God. Every good thing that happened in my life is a gift from God. I have to thank my parents, my pop Armondo and my mom Josephine who were the greatest influences in my life.

“For as long as I have known Bernard he has always been a gentleman and he has been a tremendous Amateur and Professional official.  Always has a smile on his face and a pleasure to be around. One of the good guys in boxing,” said Benjamin Esteves, Jr., referee. 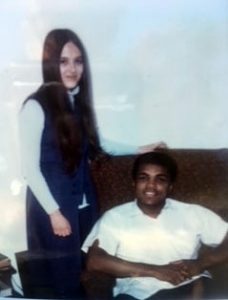 “A great guy. One of the best people in boxing! The way he and his wife Felicia ran the Central Golden Gloves for years was incredible. The organization and the shows were great. Amateur shows can be a madhouse. Fifteen coaches all wanting something or other and the promoter yelling in the doorway that he’s got 400 people in the seats and nobody’s in the ring. It takes a firm hand to pull all of this together, show after show,” said Jeff Jowett, amateur judge and writer for Seconds Out.

“I’ve had the privilege of working with Bernard on several shows in New York over the years. He is always a top class professional and true gentleman. A credit to the sport of boxing who brings honor to the craft of judging, with his consistent focus and always fair decisions,” said Charlie Fitch, New York referee.

KEN HISSNER: What do you think of the current situation in boxing mainly since the Pandemic?

BERNARD BRUNI: Boxing has always had its up’s and downs but it continues to survive. I think their approach to Covid was very thoughtful.

KEN HISSNER: Was there much difference in the four shows you worked in Canada?

BERNARD BRUNI: They were very organized. Every member of the commission wore a blue sports jack and they were always visible. The communication was always constant and helpful.

KEN HISSNER: From what I have found you have worked in eight different states. Obviously Pennsylvania has been where you have been the most active. You have also worked at Madison Square Garden and the Barclay Center in New York. Have you found much difference say compared to the legendary Blue Horizon than a large facility like those in judging a fight?

BERNARD BRUNI: Madison Square Garden and the Barclay Center are amazing, but the Blue Horizon and the Philadelphia boxing fans are legendary.

KEN HISSNER: Prior to working the professional shows you worked the amateurs since 1978 didn’t you?

BERNARD BRUNI: Yes, and I helped train boxers with legendary trainer and coach Les Krell which lead me to become a professional boxing official.

KEN HISSNER: On a lighter note do you sometimes feel you have taken advantage of working a bout without rendering a decision do to a stoppage, disqualification or no contest and still getting paid?

BERNARD BRUNI: When I sit down at ringside I am ready to go the distance. Judges work hard scoring bouts. Stoppages, DQ’s and No Contests are out of our control.

KEN HISSNER: Are there any bouts you have worked that stand out in your years of judging?

BERNARD BRUNI: For sure the Larry Holmes and Butterbean bout in Virginia, July 27, 2002. The other one was at the Fernwood Resort in Bushkill, PA., July 10, 1993, when Andrew Golota bit Marion Wilson on the chest. That was prior to Tyson biting Holyfield on the ear in 1997.

KEN HISSNER: I want to thank you for taking the time to answer these questions and putting up with writers like me and especially Jeff Jowett.

BERNARD BRUNI: You are welcome. You have always been an honest gentleman and a true friend likewise Jeff Jowett. Jeff and I spent many years working and traveling with great people like Tony Wolfe and Gary Rosato. Thank you Ken and God bless!