On September 4, 2021 at Headingly Stadium in Leeds, UK, Katie Taylor will once again step into the ring to defend her historic collection of world title belts. Having seen off the likes of Delfine Persoon, Miriam Gutierrez, and Natasha Jonas in a trying year for the spot, Taylor now faces American pugilist Jennifer Han.

As is always the case in boxing, thus why it’s such a popular and entertaining sport, even the most well-established champions can fall at a moment’s notice. However, long before the weigh-ins, many are counting out the challenger, as they almost certainly would with just about any other lightweight contender.

The inescapable shadow of Katie Taylor

Taylor is such an incredibly talented, ruthless, and dominant boxer that even absurd calls for her next opponents have been spouted enough to give them some degree of credence. The most frequent of these concerns is abrasive light-middle and middleweight belt winner Claressa Shields, who fights at least three divisions up from the Irishwoman.

While Taylor has had to brush ideas such as fantasy fights aside, she still commands a tremendous fan base, to whom she has proven to be all-but unbeatable. Having won gold at the Olympics, Taylor has gone 18-0, with six coming by way of knockout. Her closest call to date was the mixed decision triumph over the relentless Belgian, Persoon, but murmurs were quelled in the rematch less than one year later.

The IBF, WBC, WBA, and WBO World title-holder has very much earned her reputation, defeating every one of note in the lightweight division bar one, and taking the WBO belt from the super lightweight ranks. Only Amanda Serrano eludes the Bray-native’s record, who bailed from the arranged meet last year seeking a bigger purse.

With one of the few names in women’s boxing who can rival Katie Taylor for her record, acclaim, and recognition not taking up the fight, it’s understandable that few are looking to Han as the first to put a loss on Taylor’s record. So, is there much hope for the fighter from El Paso, Texas?

Han’s a long shot, to say the least

Head-to-head, Taylor and Han square up quite evenly. The challenger is a mere inch taller at 5’6’’, and they both boast a 66’’ reach. However, Han, three years Taylor’s senior, hasn’t been anywhere near as active as the woman she hopes to defeat. Through 2018, 2019, 2020, and this year, Han has fought twice, defeating both low-ranking opponents by unanimous decision. The title-holder has won ten times in that span.

So, it shouldn’t come as a surprise that the more active, undisputed lightweight champion of the world is preferred for this encounter in the boxing betting markets, with Han out at +900 to be the first to hand Taylor a loss, while the defending champion is at -3300 to retain the throne. Given their styles and activity, a win within the distance certainly isn’t off the cards, either.

The winner of the vacant IBF featherweight crown in 2015 was able to defend her belt four times and won in her step up to lightweight against Jeri Sitzes in 2020. Still, in May of this year, Han had her second son and has been going all-in to drop from 210 lbs to 135 lbs for fight night. She’s well on the way to achieving this feat, which is impressive even in athletics circles, but it adds another count against her when compared to Taylor.

The biggest factor that will come through on fight night will be Han’s style. She tends to thrive on the back foot, throwing timely jabs but often keeping her gloves quite low. While the American has proven to have a good chin when trading flurries at featherweight, and slick upper-body movements, she’s yet to face someone as aggressive and powerful as Taylor.

Taylor loves to operate moving forward. If she’s just given the middle of the ring, the Irish power-puncher will cruise straight across it, angling her foes to the sides and unleashing massive combinations. The undisputed champion is relentless and trusts her chin as much as her hand speed.

While it looks as though Han will play right to Taylor’s suiting, the challenger’s chin, grit, and willingness to prove a point will almost certainly result in fireworks on September 4 – especially if they both fancy trading bombs. 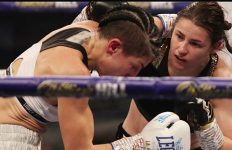