In the 1960’s and 1970’s the City of Brotherly Love, Philadelphia, the local fighters gave their fan’s plenty to cheer about especially fighting one another! One of the few to fight for a world title was Stanley “Kitten” Hayward.

On August 10th Hayward passed away at the age of 82. On January 20th of 1964 this writer attended his first live boxing event that featured Hayward winning a split decision over another Philly boxer Dick Turner, 19-1-1. In his previous fight he defeated another Philly boxer Percy Manning, 12-1, stopping him in six rounds.

In Hayward’s next fight he defeated future world champ and IBHOF inductee Curtis Cokes, 34-6-2. It would be over a year before fighting again scoring a pair of wins then defeating legendary Philly favorite “Bad” Bennie Briscoe, 17-2, by split decision. In his next fight another Philly legend “Gypsy” Joe Harris, 14-0, came off the canvas to stop Hayward in the sixth round.

Hayward bounced back with a pair of wins and in France drew with former European champion Jean Josselin, 45-4-1, moving up to 154 at the end of 1967. In 1968 he would defeat former 2-division world champion Emile Griffith, 57-10, by split decision earning a vacant WBA World title fight against Freddie Little, 40-4, losing over 15 rounds.

Next Hayward was defeated in a rematch with Griffith. Before retiring in 1977 he would fight Philly boxers Eugene “Cyclone” Hart, Perry “Lil Abner” Abney, Willie “The Worm” Monroe, Steve “Flasher Ishibashi” Smith, and again Briscoe. Ending his career at 32-12-4 (18), having been ranked by Ring Magazine at 147, 154 and 160. He was inducted into the PAB HOF in 1986 and the Philadelphia Sports Hall of Fame in 2012. 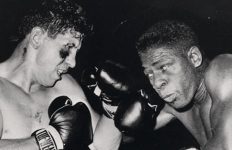