Walker was down in the fifth and ninth rounds. Referee was Eddie Claudio. For some reason this was not aired.

In the first five rounds though coming back after a two year layoff Algieri dominated the fight outworking southpaw LesPierre who had his moments. In the sixth round Algieri landed over two dozen unanswered punches bloodying the nose of LesPierre with a brutal body and head punishment.

The punishment continued in the seventh round as the former champ Algieri simply had too many skills for LesPierre. The remainder of the fight it was all Algieri who was quite impressive against a worthy opponent pitching a shutout.

In the second round Ward rocked Williams with a left on the chin having him hurt but let him off the hook. In the fifth round Ward was cut from a clash of heads. His corner didn’t do much of a job taking care of it. In the sixth and final round Ward continued to have his way. Referee was Shada Murdaugh.

In the first round after a little over a minute the taller Aponte dropped Gonzalez with a right on the chin for an 8-count by referee Sparkle Lee. Though hurt again in the final minute he managed to get through the round. In the second round within seconds Aponte landed a right on the chin and down went Gonzalez when referee Lee wisely stopped the mismatch.

In the first round the 38 year-old Cruz dominated and hit Smith after the bell. In the second through the fourth rounds Smith came back well to landing left hooks against the taller Cruz in three close rounds.

Ring Announcer’s Mark Fratto and Michael Buffer. Commentators and in between fights DJ left a lot to be desired in trying to sell this network. 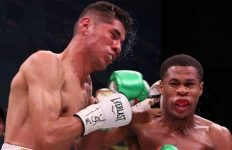 Haney Spectacular in Knocking Out Moran in 7 rounds!→