In the second round Ramirez landed a right hook to the head of Lopez and down he went with a minute left in the round. Referee Jay Nady gave him the 8-count. He was able to get through the round and actually finished with a combination of his own at the bell. In the third round Lopez had Ramirez against the ropes for the first half of the round. Ramirez landed a solid left to the head of Lopez hurting him with half a minute left in the round.

Ramirez seemed to take rounds four to six before Lopez won a round. In the eighth Ramirez hurt Lopez with a minute left in the round landing a left uppercut to the chin. In the ninth round Lopez dropped his hands to his side and got nailed with a Ramirez left on the chin that rocked him, barely getting to the bell. The ring physician came in between rounds to check he left eye of Lopez that had been swelling since the third round. Lopez with the heart of a lion convinced the doctor he wanted to continue.

In the tenth round Lopez was doing well for over half the round until a right hook from Ramirez on the chin and down he went for the second time in the fight. Referee Nady immediately waved it off when the Lopez corner signaled their fighter had enough with a little over a minute left in the round. Lopez got up and went to Ramirez embracing him in true sportsmanship.

In the fourth round Hunter landed a dozen unanswered punches knocking down Laughery and hitting him once while on his knees. Referee James Green counted Laughery out. 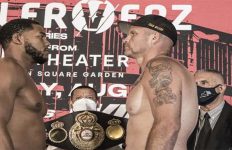