In the three rounds the southpaw Nery outworked Figueroa who didn’t use his reach but instead went inside switching from orthodox to southpaw. In the fourth Figueroa came back well.

In the fifth and sixth rounds it was Nery landing left uppercuts to the body of Figueroa. In the seventh round Figueroa from southpaw landed a right then a left body shots dropping Nery for the count of referee Thomas Taylor. This earned Figueroa another unification bout in September with WBO champ Stephon “Cool Boy Steph” Fulton of Philadelphia.

“I knew he was getting tired and my corner said to go get him. I envisioned I would defeat Nery and look forward to meeting Stephon Fulton in September,” said Figueroa. Fulton was at ringside and in the ring afterwards.

In the first four rounds for the most part Espinoza was the aggressor with Roman countering well not being the power puncher of the two. In the fifth round Roman had a good round with left uppercuts to the chin of Espinoza.

In the first two rounds Burgos usually a boxer came out slugging which is Martinez’s style forcing him to counter in two all action rounds. In the next three rounds Martinez at times had Burgos against the ropes while both had their moments. In the sixth round it was Burgos driving Martinez into a corner in the first half of the round. In the second half of the round it was Martinez getting the better of the two.

In the ninth round both ended the round toe to toe. In the tenth and final round of an all-action bout both let it all hang out in an outstanding bout with Burgos taking the fight on twenty a day notice.

Scores were all 99-91 surprisingly with the fans not pleased. This writer had it 97-93. The referee was Jose Cobian.

In the first round Valenzuela scored a knockdown causing the referee to stop the fight.

Valverde was knocked down in the second round.

In the first round Cardona knocked down De Herrera twice causing the referee to halt the fight. 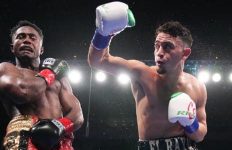 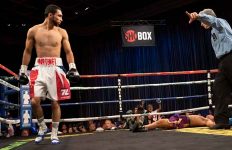