In the third round Vargas had a good round landing left hooks to the chin of Magsayo for the most part. In the fourth round both had their moments, with Vargas evening the score at the end of the round using his reach with his jab. In the fifth round Vargas did well with his rights over his jab but Magsayo ended the round well with a solid left hook to the chin of Vargas.

In the sixth round at the halfway point Vargas landed solid left hooks to the body of Magsayo. He had Magsayo missing more than connecting. In the seventh round Vargas was cut on the left eyebrow by a clash of heads in the first minute of the round. The left hooks of Vargas continue to dominate the round.

In the eighth round Vargas continued outworking Magsayo for the most part except for a right to the chin late in the round. In the ninth rounds final thirty seconds Magsayo landed a straight right on the chin dropping Vargas for an 8-count from Referee Jon Schorle. Magsayo rushed him and almost ended through the ropes as Vargas stepped aside and managed to get through the round.

In the twelfth and final round Magsayo needing a possible knockout is throwing counter rights but missing as many as landing but having Vargas on the run.

In the first round Figueroa went from orthodox to southpaw taking a close round over Castro primarily using an effective jab. In the second round Castro landed right uppercuts to the body of Figueroa halfway through the round. In the final thirty seconds of the round Castro landed a double right uppercut to the chin of Figueroa. At the end of the round it was Figueroa having Castro against the ropes with a flurry of punches continuing going from orthodox to southpaw.

In the third halfway through the round Figueroa had Castro against the ropes landing an overhand left from southpaw dropping him for an 8-count from Referee Mark Nelson. Upon getting up Castro was stormed by Figueroa landing over two dozen punches while having him against the ropes with referee Nelson taking a close look allowing Castro to land several rights at the bell.

In the fourth round Castro came out fighting back though being backed up by Figueroa against the ropes. Castro’s right would land working him off the ropes. In the fifth round Figueroa continued coming forward getting the better of it until the midway point with Castro coming back with body shots from his right uppercuts doing enough to take the round.

In the sixth round Castro continues using the ring countering Figueroa. For the first time in the fight Castro had Figueroa against the ropes. Suddenly Figueroa spun off the ropes having Castro on the ropes with fifteen unanswered punches with referee Nelson stopping the fight.

In the fifth round Marinez did well for the first half of the round landing chopping rights to the chin of Martin and an occasional left hook. In the final ten seconds Martin landed a lead left followed by a right on the chin of Marinez.

In the eighth round after ten seconds Martin drove Marinez into the ropes with a solid left on the chin. Halfway through the round Martin countered a Marinez miss with a left on the chin. In the ninth rounds final minute Martin landed five unanswered punches. In the final twenty seconds Martin hurt Marinez with a with a right hook on the chin driving him into a corner than landing five unanswered punches to the chin dropping him for an 8-count by Referee Rafael Ramos as the bell sounded.

In the tenth and final round Martin went right after Marinez having him against the ropes he doubled with right hook to the chin and a left to the body and a double right hook on the chin dropping Marinez for the second time in the fight causing referee Ramos to wave it off without a count. This writer had it 7-2 in rounds for Martin after nine rounds. He is managed by WBA, WBC and IBF welterweight champion Errol “The Truth” Spence, Jr. and trained by Derrick James. 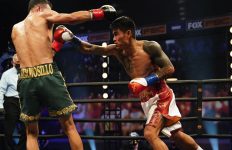 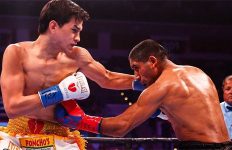