At the Wembley Arena, Wembley, London, UK, Matchroom Boxing – Eddie Hearn, over Showtime, Saturday, presented in the Main Event  David “Ava” Avanesyan defending his EBU Welerweight title coming from behind to stop Olympian Josh “Pretty Boy” Kelly in the sixth round of a bloody fight.

In the second round Kelly got cut on back of head from accidental elbow from Avanesyan. In the third round Avanesyan came back well after dropping first two rounds. In the fourth round Kelly showed angles moving and landing well though receiving small cut on right eyebrow. In the fifth round Kelly continued to have his way countering Avanesyan.

In the sixth round it was all Avanesyan landing right hand head shots dropping Kelly for an 8-count. Upon rising he wasn’t steady and Avanesyan jumped on him dropping him a second time with a left hook followed by a right to the head forcing his corner throwing in the towel making referee Victor Loughlin to wave it off.

This writer had Kelly ahead at the time of stoppage 49-46.

In the third round a lead right from Valenzuela on the chin of Davies and down he went for 8-count from referee Mark Lyson. Davies switching from orthodox to southpaw got caught. In the fourth round Valenzuela hit on the break twice causing him to lose a point. In the fifth round though his nose was bleeding Davies did enough to take the round and the next two cutting the left eyebrow of Valenzuela and the following round the right eyebrow.

In the eighth round Valenzuela came back landing rights on the chin of Davies. In the ninth round again Davies warned for hitting behind the head without losing a point. In the tenth and final round Valenzuela hurt Davies in the final 30 seconds with a right to the chin. Davies managed to get to the bell. Referee was Mark Lyson.

In the first four rounds Gill moved and boxed well. In the fifth round Juarez started man handling Gill finishing the round having Gill against the ropes. In the sixth and seventh Gill was back in control. In the eighth and ninth Juarez turning it into a roughhouse fight took both rounds. In the tenth and final round Gill moved well in taking the round.

In the first three rounds Marku switching from orthodox to southpaw is the stronger of the two but Charlton busier. In the final 10 seconds a right from Marku on the chin had Charlton out on his feet holding on to the bell. In the fifth round Charlton came back to outwork Marku.

In the sixth round at the halfway point a left hook from Charlton on the side of the head of Marku and down he went for an 8-count. Marku ran the rest of the round. In the seventh round Marku went back to using an effective jab keeping Charlton from landing another big punch. In the eighth round a left hook from Marku on the shoulder hurt Charlton. Marku followed up landing power punches having Charlton out on his feet when the Charlton corner threw in the towel.

This writer had Charlton up 57-56 at time of stoppage.

In the first round Fisher came out firing against southpaw Fisher. Fisher landed four punches to the head of Gordon making referee Ian Jon-Lewis to give an 8-count. Fisher was all over Gordon knocking him to the canvas with a right to back of head and down. Upon rising Gordon was in no condition to continue. 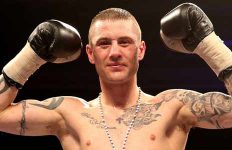