In the first round Ruiz kept coming forward as the much taller Joshua countered him. In the second round Joshua used his longer reach to keep Ruiz on the defense. He landed a solid left hook to the chin being the best punch up to this point. In the third round a big left hook to the chin of Ruiz and down he went within a minute of the round. Ruiz came fighting back dropping Joshua. A flurry of punches from Ruiz dropped Joshua in the final seconds of the round.

In the fourth round Ruiz ketp coming forward in a close round. In the fifth round Ruiz kept up the pace while Joshua’s head seemed to have cleared using an effective jab Joshua landed a hard left hook to the chin early. In the sixth round it was a big one for Ruiz, actually getting in jab’s over the taller Joshua.

In the seventh round a flurry of punches from Ruiz and down went Joshua. Joshua got up throwing punches but got dropped again with a chopping right to the head from Ruiz. Joshua lost his mouthpiece and instead of putting his hands up he had his gloves on the ropes.

“I want to thank God, my mother, Al Haymon and Eddie Hearn. The Mexican warrior I am. I have been dreaming of this since I was 6,” said Ruiz.

“I was patient and knew N’Jikam from previous sparring. I can’t wait around for Canelo and want to fight again in September,” said Smith.

In the first round with 25 seconds left N’Jikam went down from a solid left hook on the chin by Smith. He struggled getting up to beat the count of referee Charlie Smith.The taller Smith kept after D’Jikam. In the second round Smith dropped N’Jikam again with a left hook on the chin. He dominated the round.

In the third round N’Jikam spent half the round not moving but throwing overhand rights to the head of Smith. Inside of the final minute Smith landed a hard right on the chin of N’Jikam dropping him on his back with his head bouncing against the canvas.

Olympic Gold Medalist, WBA, WBO and IBF World Female Lightweight champion Katie Taylor, 14-0 (6), #134.6, of Bray, Ireland, in a unification bout defended her titles in a war winning by a majority decision over WBC, World Female Lightweight champion Delfine Persoon, 41-2 (18), #130.6, of Roeselare, West-Vlaanderen, Belgium, over 10 rounds. There should not have been a loser in this one.

In the first round Taylor showed the quicker hands of the two using a double jab. In the second round the awkward Persoon got some punches in the final minute but behind to Taylor with power.

In the third round Persoon continued coming forward throwing arm punches. Taylor countered her well in a close round. In the fourth round the rabbit punching continued due to Referee Sparkle Lee getting between the fighters too slow. Taylor had a cut on the forehead from an obvious accidental head butt.

In the fifth round both fighters landed a ton of punches mostly head shots. Another close round. In the sixth round Taylor countered the oncoming Persoon well. Persoon finally warned for rabbit punching. Persoon had swelling under her left eye.

In the seventh round Persoon was throwing punches in bunches but Taylor had he more effective punches. In the eighth round Persoon outworked Taylor. In the ninth round Persoon’s left eye filled with blood almost closed. In the tenth and final round Persoon kept punching with her nose bleeding never stopping as Taylor backed with punches.

In the first round Robinson used an effective jab to outwork Kelly who did more feinting than punching. In the second round Robinson was the aggressor as Kelly did more retreating with his hands to his side than anything else. Robinson landed several right hooks to the chin of Kelly.

In the third and fourth rounds It continued as it did in the second round with Robinson continuing outworking Kelly. In the fifth round Kelly finally came to the center of the ring mixing it up with Robinson who still out hit Kelly.

In the sixth round it was Kelly who got cut on the outside of his left eye. As the round went on the flood flowed down the side of his face. Both fighters went to the body more. In the seventh round the fight continued on the same way as did the eighth round.

Scores were Cavalerri somehow a 96-95 for Kelly and 95-95 twice while this writer had it 98-92 for Robinson. David Fields was the referee. This will go down as one of the worst decisions of the year so far. Robinson got his second straight disputed draw on a pair of fights he should have gotten the win.

In the fourth round Buatsi dropped Periban and jumped on him causing the referee to stop the fight.

In the first round Williams received a cut on the outside of his left eyebrow. From that moment on it was all Williams. He dropped Jenkins with a left. The referee actually counted to 10 and for some reason allowed it to continue. Williams gave Jenkins a real beating finally punch after punch having Jenkins in a corner. Between the corner of Jenkins and the referee he took much too much punishment. 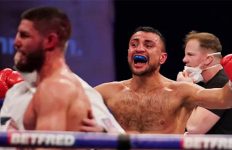