At the top of this list of good and great boxers who never won a world title is Sam Langford! In an era where colored boxers were not allowed to fight for world title fights this man accomplished a record of 178-29-38, with 126 knockouts! He was inducted into the IBHOF.

Living outside of Philadelphia I’ve seen many of their boxers like Tyrone Everett, 36-1 (20), who lose by split decision in Philly to Alfredo Escalera in the worst decision I have ever witnessed and I was there scoring it 13-2 in rounds for Everett. The Pennsylvania crooked judge never judged another fight after giving his decision to Escalera retaining his WBC World Super Featherweight title in November of 1976. The crowd of 16,019 promoted by J Russell Peltz was the largest indoor crowd in Pennsylvania history. At the age of 24 he was shot to death!

Middleweight George Benton, 61-13-1 (36), was inducted not as a boxer but as a trainer into the IBHOF. His defeat of Joey Giardello who would later become middleweight champion never earned him the right of a rematch. Getting shot ended his career as a boxer.

“Bad” Bennie Briscoe, 66-24-5 (53) was one of the most beloved boxers ever to come out of Philly! His draw with future champion Carlos Monzon in Argentina was certainly considered a win down there. It took five year to get a rematch with the then world champion in Argentina losing by decision. He had another opportunity losing to WBC champion Rodrigo Valdes later. He was inducted into the World Boxing Hall of Fame.

“Gypsy” Joe Harris, 24-1 (9), of Philly, defeated Welterweight champion Curtis Cokes in a non-title fight in 1967. He went to Dallas for the rematch and Cokes was nowhere to be found. He would move up to middleweight never losing until his final bout to Emile Griffith. It was later discovered he fought with one eye from an incident as a youth and had his license revoked.

These are just four of many who had all the ability to become champions but either never got the chance or lost when they did. 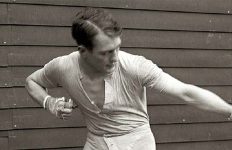