On December 7, 1992, heavyweight boxer Tex Cobb appeared on the David Letterman show. Cobb known for his humor was a big hit!

Dave: Did you see the video tape of the fight (with Larry Holmes for heavyweight title losing over 15 rounds) what do you think?

Tex: I think I lost. I would certainly do something different. I just had a bad night and made a lot of mistakes but did them going forward.

Dave: I understand you had gone to a hypnotist before the fight with Larry Holmes. How did that help?

Tex: I thought it might help me with focusing.

Dave: Did it work that night?

Tex: Oh I could concentrate like hell I just couldn’t fight that night. I knew the next right hand I threw was going to kill him. I know I could beat the man but just had a bad night.

Dave: Would you fight him again?

Tex: Yes, but Larry said no.

Dave: Did you get hurt in the fight?

Tex: I still have the same sterling features I started with. (They showed his picture afterwards on an monitor all beat up with bruises under both eyes).

Dave: Most put on sunglasses after something like this. Did you think about it?

Tex: Hell no, it was night time.

Dave: What did you do after the fight?

Tex: I went back to my dressing from and I prayed to the Lord thanking him no one got hurt. Then I went to a party.

Tex: Hard, fast and regular afterwards with 50-60 guys at a party.

Dave: I sense you are a nice guy. Are you?

Tex: I knew you would say that since I was only an arm’s length from you.

Dave: Did you know at the time that after the fight Howard Cosell said he would never cover a heavyweight fight again?

Tex: If I knew I would have had two parties.

Dave: Had you met Howard Cosell before the fight?

Tex: Yes, before the fight we met in the elevator and he said it was very distasteful that he had to cover the fight on a holiday and be away from his loved ones, his family. I got the thank you note from his wife.

Tex: Yes, he had thought I should have been there a few days earlier to talk to the newsman to hype the fight. He also cut Larry’s for some reason. Don King wanted to make more money. It’s what I expect from a promoter him being a lying, thieving scumbag.

Dave: Has Don called since?

Dave: I expect he will now.

Tex: I would like to fight Larry again. He’s a nice guy. I know I could do better.

Dave: Is Larry a dirty fighter?

Tex: He might accidently thumb you in the eye.

Dave: Can you demonstrate without doing it? (Tex showed him with his thumb an inch from his eye.

Dave: I had an eclipse when you did that! I understand you do full contact karate. How is that?

Tex: You take out a man’s eyes, break his knees. Ha Ha! You put pads on hands and feet, otherwise it’s like boxing but no kicking.

Dave: Could it be popular like little league baseball?

Tex: I don’t know really know Dave not knowing much about little league baseball but it would be a problem fighting with those little caps on.

Dave: How about the fact you were a bouncer? How did you get involved in that?

Tex: Well I believe it was due to my education level. Ha Ha! It was due to stability I had and I like to move a lot.

Dave: I understand you defended a Philadelphia sports writer?

Tex: Yes, Pete Dexter who is a real fine friend of mine and is a sports writer but I wouldn’t hold that against him. He had a problem with negotiating with some gentlemen from another part of town and wanted me to communicate with them. They came to negotiate but didn’t know how to negotiate. We met at 24th and Lombard and they came with crow bars, long pieces of iron and some baseball bats. Those suckers must have worked at a junk yard. They were not well trained or we would have gotten killed.

Dave: You had a broken arm and Pete got hurt seriously right?

Tex: Pete spent time in the hospital. There were about 30 of them.

Dave: I understand you did a movie with Richie Schroder. Are you doing any filming again?

Tex: I doubt if for if you don’t kiss the right ass forget about it.

Dave: Thanks for being here.

Tex: My pleasure being here on your last show, ha ha! 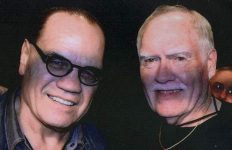 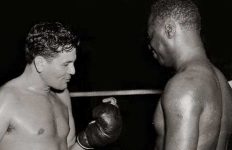 Boxing and Movies About Boxers and With Boxers in Movies!→ 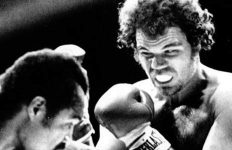 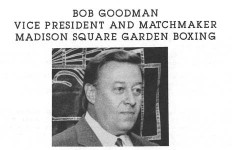 Over 65 Years in Boxing and Bobby Goodman Says I’m a Lucky Fella!→