This past Saturday night (8/29) at the Calvary Chapel Delaware County church in Chadds-Ford, Pennsylvania former boxer Ebo “Extreme Machine” Elder returned after seven years to an outdoor audience of about one-hundred. It would end with numerous people being baptized in the pool by Elder.

It started with a showing on the screen of his exciting bout on Showtime against No. 4 world ranked Courtney Burton, 21-2, having Elder’s both eyelids cut and closing in the twelfth and final round needing a knockout to win. At 2:10 of that round No. 5 world ranked Elder, 21-1, scored a punch that put Burton down for the count of referee Jerry Cantu with the southpaw Elder retaining his WBO NABO Lightweight title. What caught the attention of the watching boxing world was as the physicians had Burton put on a stool Elder kneeled next to him sharing his Lord and Savior Jesus Christ with Burton acknowledging each word nodding his head in agreement. In his next fight he lost in a title eliminator and a loss on “The Contender” only to retire after his January 2006 bout with Mike “No Joke” Stewart. Their wives had become close friends prior to their bout. His final record was 22-3 with 14 knockouts being from Newman, GA.

“Everywhere I look I see people hurting and hopeless, looking in all the wrong places for satisfaction, fulfillment, and purpose. In The Great Comeback, Ebo points you to the answer with passion and clarity. You’ll see the power of God to transform a life as you journey with Ebo, round after round. Ebo is transparent, real, and raw, digging through his past of abuse, divorce, drugs, alcohol, crime, depression and more. I am confident that his story can change your life!”

There are 12 rounds (chapters) from “An Unlikely Candidate” in Round 1 to “Jesus is King” in Round 12, including some 222 pages.

Elder is a former, world ranked, professional boxer. He earned three championship belts, appeared on the second season of ESPN’s reality show, The Contender, and won a fight nominated for “the fight of the year” and the “knockout of the year” on Showtime in 2004. Today Ebo is an author, pastor, evangelist and Bible teacher.

At CCDC church Elder talked about marrying his high school sweetheart three weeks after graduation with her dad a pastor to have the marriage end some 18 months later by his wife. I had a life of cocaine, alcohol for two years. I had a 45 pistol to my head and heard a small voice “don’t quit, I will repair loss in your life!” They would re-marry year on April 14, 2001 and his wife Amy and he had three girls. He talked about the “5 Keys” including Perseverance, Respective (Provers 2:7), Power, Praise, and Prayer.

Pertaining to his bout with Burton he said “Showtime called they wanted us because we are exciting and bleed a lot. I had seen Burton defeat Angel Manfredy, 42-6-1 by knockout who I knew well. Going into the match God gave me the faith I would win. Several rounds into the fight I knew I was in over my head. God, I know I’m going to want to quit. God told me he will help me (John 15:5). My jaw was broken in the fourth round, in the seventh my kidneys were bleeding, and by the eleventh round both eyes were cut and closing going into the twelfth round. I thought I’d died and been resurrected on Showtime. I got hit with a right into the ropes and wanted to throw my left but it was caught on the ropes. Thirty seconds later I had him out!

For 28 years I suffered from depression. I then identified with the praises in my life knowing worship and depression cannot co-exist. 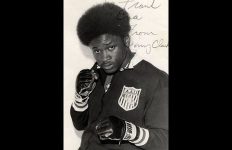 Coatesville’s Jimmy Clark Remembered as GG Champ and as A Pro!→