WHEN: Tonight/Friday, June 12, at 10 p.m. ET/PT – Immediately following the premiere of RINGSIDE, an award-winning documentary chronicling the dramatic upbringing of two boxing prodigies from Chicago’s South Side.

WHERE TO WATCH: On SHOWTIME, via the SHOWTIME streaming service and SHOWTIME ANYTIME®.

ADDED COVERAGE: During Friday’s SHOWTIME BOXING CLASSICS telecast, combat sports analysts Luke Thomas and Brian Campbell will host a live digital companion series titled MORNING KOMBAT CLASSICS on the Morning Kombat YouTube Channel. They will watch the fights along with viewers, give their real-time reactions, and take questions from fans throughout the replay. Viewers can follow along and participate in the discussion by using the hashtag #FightFromHome on Twitter, Instagram and Facebook. 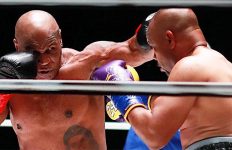 Mike Tyson and Roy Jones, Jr. Ends in A Draw on PPV Saturday!→