Jaron “Boots” Ennis is an unbeaten Philadelphia Welterweight who is ranked No. 11 WBO, No. 12 IBF and No. 16 WBC looking to extend his 25 fight winning streak against Juan “Merengue” Carlos Abreu, of the Dominican Republic Saturday on Showtime. There are three bouts listed.

“Pooh” and his father “Bozy” have been inducted into the PAB HOF this year. Farah won’t be eligible until next year needing to be inactive for five years. “Boots” was an Olympic alternate in 2015.

The 23 year-old Ennis has won his last fifteen fights by stoppage. In his last bout he stopped Bakhtiyar Eyubov, then 14-1-1, of KAZ, in four rounds in January.

Abreu was an IBF Youth Super Lightweight champion. In his last bout in November he scored a first round knockout over Israel “El Guerrero” Valerio, then 15-0, also from the Dominican for the WBC FECARBOX title. Abreu is 33 and fights out of Boston, Mass. He has never been stopped. 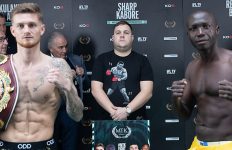