In the first two rounds hardly a punch was connected with Ortiz coming forward. Each fighter connected 7 punches in 6 minutes. In the third round Wilder finally landed a right to the chin at the halfway point of the round. Ortiz ended the round with a lead left on the chin of Wilder.

In the fourth round after a minute Ortiz backed Wilder into a corner landing a left on the chin. On another occasion Ortiz landed a left to the mid-section of Wilder who was backing up. In the fifth round both are covered with sweat and water but lack of action continued.

In the sixth round inside the final minute Ortiz landed a left on the chin of Wilder backing him up several steps. Halfway thru the round a total of 50 punches landed. In the seventh round out of nowhere a right cross from Wilder connected on the chin and down went Ortiz under the ropes trying to beat the count as referee Kenny Bayliss waved it off.

In the first round Figueroa worked the body with uppercuts. In the final minute he landed right hooks from the southpaw side on the chin of Ceja. Big round for Figueroa.

In the second round they went to war especially to the body. It was a good round for both while Figueroa’s total count was not as good as Ceja’s. In the third round Ceja landed much to the body as Figueroa at one point landed three chopping left’s from southpaw to the head.

In the fourth round Ceja had Figueroa backed into a corner for half a minute then got turned around by Figueroa who continues to mostly fight southpaw. In the fifth round both continued landing punch after punch mostly in the body area. In the final minute Cedja was outworking Figueroa. He landed the best punch of the round with a left hook on the chin. Ceja was bleeding from the mouth by the end of the round.

In the sixth round Figueroa got back in the lead while Ceja may be swallowing blood from his lips being cut. In the seventh round Ceja did a lot of bobbing and weaving not mixing it up as well as Figueroa. The volume of punches was at the highest so far in the fight in this round.

In the eighth round while his back to the ropes Cedja landed close to a dozen mostly body shots on Figueroa. The fight has been very close. Referee Jay Nady has had an easy fight up to this point. In the ninth round it continued with over 1,000 punches thrown by both fighters. Figueroa has had a tough opponent in this one.

In the tenth round Ceja continues to outwork the champion up until the final seconds. In the eleventh round Ceja had Figueroa walking into punches. In the final minute of the round both went to the head for the most part.

In the twelfth and final round the champion knowing his unbeaten record not his title could be on the line kept the pressure and outworking Ceja.

In the first two rounds Santa Cruz outworked Flores. In the third round the fight continued being close though the champion has won at least two of the three rounds. In the fourth round Santa Cruz kept his hand held high pressing the fight. The punch count is close with the champion holding an edge.

In the fifth round both fighters are doing more head than body punching. In the sixth round Flores warned for holding by referee Tony Weeks. Fight continues close but the champion stays one step ahead of the challenger.

In the seventh round Santa Cruz keeps chasing Flores down. Flores holding too much looking to go the distance instead of winning. In the eighth round referee Weeks finally takes away a point from Flores for holding before half the round was over. Santa Cruz continues chasing down Flores.

In the ninth round Flores warned for low blow. Each round is like the previous one. Having followed an all-action fight between Figueroa and Ceja this one looks tame. In the tenth round Flores came in with his head causing a nasty cut over the upper left eye of Santa Cruz. Flores can only win by stoppage and this fight could have been stopped and gone to the scorecards due to the head butt.

In the eleventh round Santa Cruz trying to end it rocked Flores with a right cross halfway thru the round on the chin. In the twelfth and final round with Santa Cruz way ahead Flores is still looking to go the distance. Santa Cruz seems to have won every round in this one. Santa Cruz always seems to have a smile on his face as both fighters embrace.

In the fourth round Ramirez had a very good round wildly swinging at times but landing head shots with little body punching by either fighter.

Too many lower weight (under 130) fights on undercard leading up to heavyweight main event on this show. 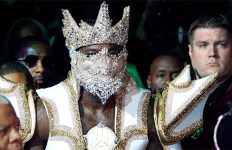 Wilder Blames the Weight of His Outfit for Loss to Fury?→ 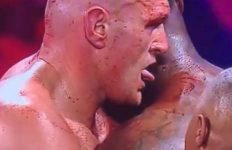