In the combat scene from the movie Enter The Dragon, Bob Wall’s character, O’Hara, breaks two boards before combat. Bruce Lee responds “Boards don’t fight back.” Indeed, masks, costumes, dancing, and showboating maneuvers before and during professional boxing bouts are not the fight itself. Bobby Fischer style, the art of pugilistic psychological warfare has evolved greatly.

At one point, the champion always entered the ring after the challenger, and ring entry was a major point of contest. It had nothing to do with the bout, or all of it, depending on your viewpoint. What took place in the ring had dramatically evolved many decades later, when Super lightweight Emanuel Augustus, “The Outlaw” or “The Drunken Master” turned dance maneuvers during a pro bout into a psychological art designed to confuse and psych out his opponents. Augustus won the IBA World Light Welterweight title, and was ranked as high as second in the world by the International Boxing Federation.

British super bantamweight and featherweight Prince Naseem Hamed turned the arrival of the boxer into an entertainment showcase, turning the runway entry towards the ring into a wild extravaganza. Hector Macho Camacho, wearing everything from Native American headdress to Roman soldier regalia, turned the ring entry into what he called “Macho Time”, always stealing the show and providing entertainment which exceeding the ring battle, turning it into a boxing show of sorts. 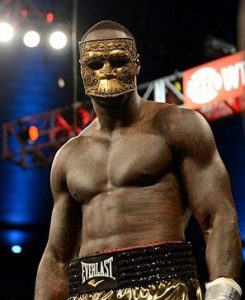 Deontay Wilder, former World Boxing Council World Heavyweight champion, has turned the art of boxing masks and costumes into a supreme art form. Current champion Tyson Fury has arrived as Batman. Contrasting this style was Iron Mike Tyson, who arrived only in boxing trunks Jack Dempsey style, letting his fists do the talking. Usman “Uzzy” Ahmed’s ring entry Gangnam dance is perhaps the most famous YouTube dance, as it was great entertainment from a boxer, who, unfortunately for him, was not a very good boxer. The dance, spliced into Ahmed’s bout with Ashley Sexton, actually was from a different bout, which most viewers do not know, making his knockout by Sexton more dramatic.

This reporter’s view is ring showboating usually does not benefit the boxers who dropped their guard during a bout. You still have to be able to fight to win. Showboating moments often do not go well. The Ali shuffle, the Roy Jones hands behind his back rooster punch, Hamed’s low hands dance and move style, Adrien Broner’s bump and hump, are all forms of entertainment. The major issue has to do with the momentary lapse in concentration by a fighter which can result from showboating.

Commonwealth British Empire Super Lightweight champion Sam Maxwell was down in the first and second rounds of a WBO European ten round bout with Sabri Sediri and had lost the bot on points. With 14 seconds left, Sediri, showboating in the tenth and final round, got decked onto his back with a brutal right hand by Maxwell and lost.

Felix Verdejo’s 2014 third round knockout of Sergio Reyes in Orlando, Florida, after the Mexican dropped his guard and taunted him is a hand speed classic. Marcos Maidana’s 2013 WBA Welterweight title victory over Adrien Broner featured two knockdowns, and you humped me, I humped you response. Australian super featherweight Robbie Peden’s 2004 knockout of a guard down Nate Campbell in round five is another YouTube classic. Ray Leonard stuck his tongue out at Hector Camacho, then got brutalized, dropped and stopped on the ropes in the fifth round of their IBC World Middleweight title bout in 1997.

The concept is a contrast versus flash, dance, and boxing style versus momentary lapse in judgment. Some athletes can get away with it. In some sports like football, showboating carries a penalty. We all love good entertainment, which is why Muhammad Ali’s bragging mouth and poetry was such good karma during Ali’s career. Boredom is not good entertainment. Flash and colorful personality help to sell a fighter’s career in many instances. The fighter is engaged in a form of self-promotion, to support their promoter’s promotion. Form Jack Johnson to Muhammad Ali, the crazier a fighter’s life, career and personality, apparently, the better it sells. Most fighters are ordinary. It depends. The crazier and flashier the heavyweight champion, the more the public loves it. Deontay Wilder is the king of boxing flash for the moment. Wilder’s masks and costumes are great entertainment, but it still does not answer as to whether or not the flashier fighter can win the big fight. Flashy boxing personalities still help to promote in a positive direction a combat sport in the media eye.

What it’s all about is boxing psychology. The concept is to outpsych and intimidate the opponent’s subconscious mind, to win the bout with confidence and aggression in the opponent’s mind before the bout takes place. This amounts to an emotional war of mind over ego, and interjection of the fear factors and unknowns as the other opponent perceives it. Some extraordinary personalities attempt to go after ordinary personalities in this way, to different degrees of effectiveness and success. The bottom line at the box office is what sells. Publicity helps the cause. The bottom line inside the ring is who wins, which does not always equate to dollars. Boxing psychology versus boxing victory does not always equate. Psychological warfare in pro sports remains an underestimated misunderstood factor.