From Sao Paulo, Brazil, inducted into the World Boxing Hall of Fame and IBHOF in 1992 being a two-time world champion Eder “Golden Bantam” Jofre had a brilliant career after representing Brazil in the 1956 Olympics.

Jofre was the South American champion when he won an elimination match knocking out Mexico’s Joe “El Huitlacoche” Medel, 43-16-3, in 10 rounds in L.A. In November of 1960 he got his title shot winning the vacant NBA World Bantamweight title knocking out Mexico’s Eloy “Emeterio” Sanchez, 25-12, in 6 rounds at the Olympic Auditorium in L.A. improving his record to 34-0-3.

Jofre reversed those draws (two with Miranda) defeating Argentina’s Ernesto Miranda, 43-4, for the South American title by decision and four months later knocked him out. He knocked out Uruguay’s Ruben Caceres, 13-2-8, in their rematch.

In March of 1961 in Rio de Janeiro in his first defense he defeated Italy’s champion Piero Rollo, 53-6-6, who couldn’t come out for the tenth round. After a couple of non-title knockout wins including Japan’s Sadao Yaoita, 43-9-2, he made his second defense in August stopping Venezuela’s Ramon Arias, 25-8-1, in 7 rounds in Caracas. In his next fight he stopped the World Boxing champion Ireland’s Johnny Caldwell, 25-0, when his manager jumped into the ring and stopped the fight in the tenth round in Sao Paulo.

In Jofre’s first world title defense in May of 1962 at the Cow Palace in Daly City, CA, he stopped Mexican Herman Marques, 19-8-1, in the tenth round. In September in a rematch with Medel, 52-17-4, he scored a knockout in 6 rounds in Sao Paulo.

In April of 1963 Jofre traveled to Tokyo, Japan, where he knocked out Japan’s Katsutoshi Aoki, 33-1-1, in 3 rounds to add the WBA and WBC world titles. A little over a month later he went to Metro Manila, in the Philippines, where he stopped Filipino Johnny Jamito, 33-3-2, who couldn’t come out for the twelfth round. In November Jofre went to Bogota, Colombia, knocking out Bernardo Caraballo, 39-0-1, in 7 rounds.

In May of 1965 Jofre returned to Japan defending against the WBA World Flyweight champion Fighting Harada, 38-3, losing his title and unbeaten record by split decision dropping his record to 47-1-3. It would be a year before he got a rematch in Japan losing a close decision.

Jofre decided to move up to featherweight winning fourteen straight before defeating Cuba’s Jose Legra, 128-9-4, out of Spain, for his WBC world title in May of 1973 in Brazil by majority decision. In October he knocked out the former WBC and WBA champion Mexico’s Vicente Saldivar, 37-2, in 4 rounds. He never defended the title again but won his last seven fights ending his career defeating Mexico’s Octavio “Famoso” Gomez, 55-14-7, over 12 rounds finishing his career with a record of 72-2-4 with 50 knockouts.

The other was the 1948 Olympic Gold Medalist inducted into the World Boxing Hall of Fame and in 1995 the IBHOF Argentina’s Pascual “Terrier” Perez, at just 4:11.

Perez drew in a non-title fight with World Flyweight champion Yoshio Shirai, 44-6-3, even though Perez was 108# Shirai was 112 ¾, in July of 1954 in Argentina. In November he got his rematch in Tokyo, Japan, knocking out Shirai for his World Flyweight title with a 15 round decision win. In May of 1955 in a rematch in Japan Perez scored a knockout in 5 rounds.

In April of 1958 Perez went to Caracas and defeated Ramon Arias, 8-1. In December he went to Manila, Philippines and defeated Filipino Dommy “Toy Bulldog” Ursua, 19-15-1. The following month he went to Japan losing in a non-title fight to Sadao Yaoita, 27-6-2.

In Perez’s next two fights in Japan he won a non-title fight and defended his title over Kenji Yonekura, 4-2, in August. In November he knocked out Yaoita, 31-6-2, in 13 rounds in Japan.

Perez would go onto win his next thirty fights before losing to Filipino Leo Zulueta, 18-6-3, by split decision in Metro Manila. He would then go 2-3 in his last fights all out of the country including to Bernardo Caraballo, 32-0-1. His final record was 84-7-1 with 57 knockouts. He was Argentina’s first world champion. 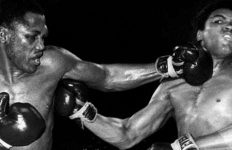 12 of the Greatest P4P Boxers in Modern Times→ 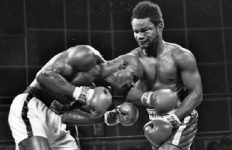