In the first round Pacquiao landed a body shot and one on the chin knocking Thurman to the canvas. Referee Kenny Bayless gave him the 8 count as the round ended. In the second round Thurman came forward and Pacquiao countered in a close round.

In the third round Thurman fired punches when Pacquiao was against the ropes with his hands held high. Pacquiao punched his way off the ropes backing Thurman up in a close round. In the fourth round Pacquiao did well in the middle of the ring but not against the ropes.

In the fifth round Pacquiao flurried in the middle of the ring and fought his way off the ropes cutting Thurman on the left cheek. In the sixth round Thurman had problems when he was backing up but did enough to take the round when Pacquiao went to the ropes.

In the seventh round Thurman controlled the first half of the round with Pacquiao coming back in the latter half. In the eighth round Thurman evened the score except for the knockdown. In the ninth round Thurman suffered a small cut under his right eye in another close round.

In the tenth round Pacquiao hurt Thurman with a good body shot halfway through the round. Thurman got back into the fight in the second half. In the eleventh round Thurman came back well but still seemed behind.

In the twelfth and final round it was close with Thurman winning but was it enough considering the knockdown?

In the first round with two minutes remaining Ugas landed a right to the chin of Figueroa driving him into the ropes that saved him from going down. Referee Russell Mora correctly ruled it a knockdown. In the second round Ugas was warned twice for holding Figueroa. Figueroa would come in with his head low and Ugas would either hold him or push him off.

In the third round Ugas would force Figueroa against the ropes landing punches when he got him there. Then hold and push him back against the ropes. In the fourth round referee Mora warned both fighters about holding. They banged heads with Figueroa cut on top of the forehead.

In the fifth round referee Mora correctly finally took a point from Ugas for holding. In the sixth round the ugly fight continued with Figueroa coming forward getting into a clinch due to Ugas holding. From the seventh through the tenth round the fight continued all inside with too much holding and Ugas winning.

In the eleventh round Figueroa knew he was in for his first defeat but overweight and slow he had no chance of scoring a knockout which is what he needed in the final round. In the twelfth and final round Figueroa kept running into uppercuts on the chin from Ugas.

In the round second round Lipinets landed a left hook on the chin and down went Inson face first to the canvas. He beat the count but referee Jay Nady didn’t feel he was ready to continue and stopped the fight.

In the first round both fighters felt one another out with Payano outworking Nery. In the third and fourth rounds Nery continued to press the action but missed more than he landed. Payano still outworked him. They have banged heads almost every round.

In the fifth and sixth rounds Payano countered Nery who came forward swinging wildly mostly missing. In the seventh round the pattern of the fight remained the same with Nery pressing but Payano landing more punches. In the eighth round Nery finally seemed to outscore Payano whose nose was bleeding.

In the ninth round Payano was knocked down and out with his nose and mouth bleeding he never made an effort to get up. Nery caught him under the right arm with a left cross. 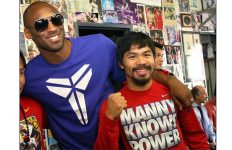