In the first round there were few punches landed until the final ten seconds when Charlo landed a solid right uppercut to the chin of Adams. In the second round the lack of action continued with Adams doing too much ducking and not enough throwing while Charlo’s accuracy wasn’t much to brag about.

In the third round Charlo got in the best punch of the fight up until then landing a solid right on the chin just prior to the end of the round. In the fourth round Adams came in with his head on two occasions to the chin of Charlo which was more effective than any punches he landed.

In the fifth round “controversial” as the ring commentators called him prior to the fight, referee Laurence Cole seemed to be in too late on too many occasions to separate the fighters. Charlo landed half of his punches as Adams slipped without throwing anything back.

In the sixth round Charlo continued to control the fight up until the final minute when Adams finally landed an offensive attack starting with a lead overhand left from the southpaw stance to the head of Charlo. In the seventh round the fight continued to be on the “ugly” side. Adams wasn’t throwing enough to make it interesting.

In the eighth round Charlo was warned for tossing Adams to the side by referee Cole. With his back against the ropes Charlo got nailed with an overhand right on the chin by Adams in the final ten seconds then backed off. In the ninth round it seemed like Adams was content to go the distance more than win the fight. He showed too much respect for Charlo.

In the tenth round Charlo continued throwing more but can’t seem to hurt Adams. Adams didn’t do much until the final ten seconds with several punches to the chin of Charlo. In between rounds Adam’s co-trainer Freddie Roach is trying to encourage him to throw more punches.

In the eleventh round Charlo with the local fans urging him on is trying to land the big punch but frustrated by Adams defensive style. In the twelfth and final round the one-sided fight continued with Charlo ending the final ten seconds with hands in the air and Adams mocking him bowing! This bout did nothing for boxing and Charlo should hope he doesn’t fight Gennady “GGG” Golovkin in the near future as talked about.

Interviewer Jim Gray asked Charlo “did you hurt your hand? Charlo said “it’s more or less part of the game!”

In the first round southpaw Lubin kept on the pressure as Attou kept moving around the ring. In the second round a pair of solid straight lefts from Lubin on the chin of Attou rocked him early in the round. Attou kept moving to the power of Lubin.

In the third round Attou kept checking a lump on his right bicep from a shoulder in a clinch. He was on the move the entire round. In the fourth round Attou kept backing into the corner where he was jumped on by Lubin until he was driven into the bottom strand of the ropes. Attou’s corner wisely threw in the towel stopping the fight. He should not have come out for this round in the first place with the injury.

First of all I want to thank God, my family, my trainer Kevin Cunningham and PBC. Two champs have obligations so my next fight should be against a top contender,” said Lubin.

In the first round both southpaws felt one another out. Ramirez ended the round with a solid left to the chin of Marrero. In the second round Marrero went on the offense. He showed more hand speed than Ramirez but with hands to his side he was open for counters.

In the third round Marrero landed a vicious body attack until he was warned for a low blow by referee Rafael Ramos. He continued this body work throughout the round. In the fourth round Marrero slips punches well and counters even better. Ramirez missed a left and was countered by a solid left to the chin by Claudio in the final seconds of the round.

In the fifth and sixth rounds Claudio kept on the pressure using hand and foot speed that Ramirez had no answer for this. In the seventh round at the halfway point Ramirez got in half a dozen punches without return. It was the best round of the fight and best for Ramirez.

In the eighth round Ramirez kept up the pace knowing he lost many of the earlier rounds. In the ninth round Ramirez known for a better late round fighter had Marrero on the ropes landing to the head.

In the tenth round Marrero continued going to the body while Ramirez more to the head. Marrero landed a pair of low punches drawing a warning from referee Ramos and giving Ramirez only half a minute to re-coup.

In the twelfth and final round Marrero was doing a lot of holding trying to coast to the end. Ramirez had the better of the round but might not be enough. Referee Ramos made all wonder about some of his separations of the fighters while they were throwing punches. 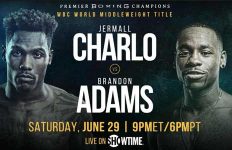