In the first four rounds it was all Charlo with Montiel going from southpaw to orthodox walking into Charlo’s punches. In the fifth round Charlo had Montiel in trouble with a flurry of punches.

In the sixth round Charlo had Montiel hurt after a minute into the round. In the final minute Montiel ralled until the final ten seconds when Charlo again had Montiel hurt with a left hook to the head. In the eighth round Montiel made a fight of it. In the ninth round Montiel caused a cut on the right eyebrow of Charlo driving him backwards the entire round. In the tenth round Charlo came back to take the round though Montiel never stopped coming forward. In the eleventh round Charlo landed uppercuts to the chin of the oncoming Montiel. In the twelfth and final round Charlo continued out landing Montiel in a fight the latter wasn’t supposed to go the distance.

“First I want to thank God for without him we have nothing. Montiel was a true warrior who came to fight. I had never been cut before so I had to make adjustments. I want to unify so Golovkin lets go,” said Charlo. “I needed a fight at this level. I know in the future I will be a world champion, viva Mexico,” said Montiel.

In the first four rounds southpaw Alameda won the last three after dropping the first to Leo. In the fifth round it was Leo having Alameda in the corner where Leo spent most of the rounds. In the sixth round Leo had a mouse under his right eye but did enough to even the score. In the ninth round Leo’s right eye was near closed. In the tenth and final round Alameda seemed to take a close round having the face of Leo well bruised under both eyes.

In the first five rounds it was Cruz landing overhand rights and body work. Vargas finally won a round in the seventh. In the tenth and final round a head butt from Cruz caused a bad cut over the right eye of Vargas. A flurry of punches from Cruz dropped Vargas for an 8-count from referee James Green. Vargas showed guts to the end. 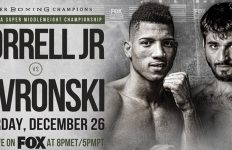