In this writer’s opinion the greatest Olympic Boxing team the USA produced at least in modern times was the 1976 Olympic Boxing team. Five of those members went onto win world titles as professionals. They were “Sugar” Ray Leonard, Leon and Michael Spinks, Leo Randolph and John Tate. Harold Davis won the Val Parker Award at those Montreal Olympics as the best boxer.

On that team was one fighter a little “different” than the others and they tagged him “White Chocolate”. That was Chuck Walker who at the time lived in Mesa, AZ, but now is a resident of Montgomery, AL.

Walker won the 1975 AAU title over Wide World of Sports defeating the All-Service Champion from Washington, D.C. Keith Broom. Prior to the fight the ring commentators claimed “wait until you see this boxer Chuck Walker!” Being he was from a place (Mesa, AZ) I wasn’t familiar with I thought “oh year, this should be good.” This boxer, Walker, comes out with foot work I couldn’t believe. He may have not been Muhammad Ali or Willie Pep but he was dazzling the crowd. He knocks out Broom and the commentators call him over for a few words. “Chuck, what do you do when you are not boxing?” He replies “I’m a professional tap dancer!” I don’t have to tell you it was not only a surprise to the two commentators but also to me.

When the 1984 team went to the Olympics without the Cubans or Russians participating I thought “no wonder they won so many Gold medals”. When I started writing back around 2006 or a little later I did an article comparing the two teams. Manny Steward and Joe Cloud were my other two judges. 1976 won out 8-3 not including the super heavyweight champion Tyrell Biggs from the 1984 team due to the fact that was the first year there was a super heavyweight division.

Among those 8 winners picked were Chuck Walker. Not only did he win the 1975 AAU title but won a Bronze Medal in the Pan Am Games prior to the Olympics. His opponent in the Olympics was Jerzy Rybicki (went on to win the Gold Medal) of Poland. Walker lost a disputed decision (split 3-2) per commentator Harold Cosell. “I didn’t think he was that good and never got hit by a good punch,” said Walker. Walker was asked by Cus D’Amato who took the 1952 Gold Olympic Medalist Floyd Patterson to a world title in the professional ranks asked Walker to come train with him. ‘I didn’t want to be trained into that (peek-a-boo) style Cus had all his fighters due to my foot work,” said Walker.

Walker would eventually turn professional winning his first four fight which strangely were all 10 round scheduled bouts. In his fifth fight he received a cut and suffered his first and only loss against Darryl Penn. Hall of Fame trainer George Benton from Philadelphia once told me he was in Penn’s corner.

Though Walkers first trainer as an amateur was Gene Lewis in Mesa he picked from Finland Poso Paavo Ketonen who at one time was Finland’s wrestling champion. Go figure about that choice by Walker. After going 4-1 Walker returned to the entertainment business and appeared on such shows as runner-up on “Dance Fever” and a 2-time winner on “Ted Mack’s Amateur Hour.”

Seeing all the money his former teammates were making and recovering from an injury to the hand area Walker decided to go back to the pro ranks. He would win 5 straight (claimed 7) and end up his career with a draw against Everett “Big Foot” Martin who would eventually grow into a heavyweight and face “Big” George Foreman.

Walker since retiring from boxing after failing to get a world title fight with the champion Chong-Pal Park, 40-3-1, from South Korea as promised hung up the gloves. Philadelphia’s Marvin Mack was picked at the opponent. He has produced movies for the DVD and television market. His partner was Eric Braeden who played Victor Newman in “The Young and the Restless”. He often visits his former teammate Leonard when he is in the L.A. area.

Speaking of Leonard, some years ago when he was in Philadelphia to see his cousin O’Dell Leonard box I met him at the Joe Frazier Gym. He didn’t have a lot of fights at the time but I asked him if in his last fight in AZ did he see Chuck Walker? He asked if I knew Chuck? I said “no, but I did see him in the 1975 AAU tournament.” I then asked “what did you think of Chuck as a boxer?” He said “I wouldn’t want to fight Chuck because our styles are so similar it would make for a bad fight!” Standing behind Leonard was the heavyweight alternate to Tate named Marvin Stinson who was from Philadelphia. He chimed in with “when Chuck (154#) hit you he hit you so hard he made your *&%$ stiff!” You can fill in the blanks.

Walker sparred many rounds with #165 teammate Michael Spinks. At a boxing event in the state of DE I addressed Spinks about this. “I never looked forward to sparring with Chuck,” said Spinks. The footwork must have been an obvious problem for him.

Through film I have seen Walker fight 3 times as a professional. One was with Ignacio Zavala, 6-1, in Houston that Walker won by split decision. I thought it was a good fight and that Walker won without a doubt. The other fight was against Tony Shorter 2-0, who was handled by one of Texas’ top handlers. He told Shorter after 5 of the 6 rounds scheduled “you are going to have to knock him out in order to win.” Walker easily won 5 of the 6 rounds per commentator and former editor of Ring Magazine Randy Gordon.

At an event celebrating either their 25th or 30th anniversary the 1976 team was at the IBHOF ceremony to receive an award. Leon Spinks spotted Walker while talking to a reporter and pointing said “there’s Chuck Walker, the only white guy on the team and the best dancer. Go figure.” 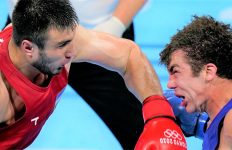 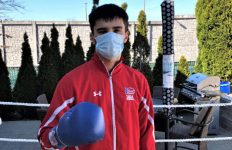