The newest entity in MMA kicks off this Saturday, September 15 at the new Hard Rock Hotel & Casino Atlantic City in bouts streaming live on FloCombat.com (9 p.m. ET/6 p.m. PT). Tickets for the inaugural installment of “MMA Pro League At The Hard Rock” are available at Ticketmaster.com.

The full bout sheet is available HERE. Here is what the fighters in attendance and league executives had to say Thursday:

“It means a lot to be coach for Team New Jersey. It’s my home state and it’s a big event for it. I love the team concept and I’m proud to be in this position.

“We’re here representing the whole state. We’ve had the team training together and building camaraderie. It’s like a wrestling match style where each team is sending people out.

“Everybody looks good and healthy in training camp. I think we’re ready to go. All of these fights are going to be fantastic. These are matched very well and it should be a fun night. Team Pennsylvania better be ready, because our guys are.”

“Everything in training has been perfect. I’ve been working with most of these guys for a long time already so we just kept up what we’ve been working on. With the team concept we have a lot more people to focus on instead of just one or two. We already had good chemistry though, so everything went smoothly.

“Our amateur guys turning pro are going to show that they belong in these fights. It’s time to grab the spotlight. Your first fight is the best opportunity to make an impression.

“I think that MMA needs something new that can draw people’s attention. This is a great chance to bring in the fans who don’t pay attention to MMA and give them a chance to get behind their local teams.”

“Fans should expect something completely different than they’re used to. MMA has always been a team sport and I’m glad we’re going to be the ones to expose that to the world. These guys have always trained with a team, because you can’t train by yourself.

“We believe this is going to be the new era of MMA. We’re going to give cities and states all around the world the chance to really stand behind their own teams.

“There’s been a lot of hard work and strategic planning leading to this and it’s finally coming to fruition. It’s a vision that we implemented and once we got the right people we knew it was a theme we believed in so much that we decided to execute.”

“We’re going to create a legacy in this sport that is going to last for generations to come. I had the privilege of launching HBO PPV 30 years ago and I saw a lot of history be made. Now I have the chance to do it again, along with my partner Hani Darwish.

“One of the most important things to MMA Pro League is to have the right coaches leading the teams. Dan Miller and Daniel Gracie are both natural leaders, mentors, great former fighters and great teachers. They represent everything we want to represent with MMA Pro League.”

Kolker: “This is really exciting and I’m very thankful for the opportunity. We’re doing something different than anyone else is doing and I think it can be something special.

“I know that I have an opponent who can wrestle and who’s undefeated as an amateur. I feel like I have the tools to beat him. I can catch, slip and put him away with something early. Or if he wants to go the distance we can do that too. I predict I knock him out.”

Kamchybekov: “This is my first pro fight and I’m very happy to have the opportunity. I don’t know too much about my opponent but I will be prepared. I have worked very hard and I’m going to show my wrestling and striking to get this win.”

Ruiz: “It feels good to get back in the cage and feel the adrenaline. I’m hoping to give everyone a great fight.

“I know my opponent is a wrestler so he’s going to try to take me down. He’s not going to want to stand up with me, but I’m prepared for a lot of wrestling. I’m trying to knock him out and go eat a burger.”

Hier: “It’s amazing to be a part of this MMA Pro League venture. It’s such a great opportunity and I’m glad to be on the ground floor.

“My opponent has taken some time off but I know he’s going to be ready to fight. I’m not sleeping on him. This is going to be an action fight.”

Ledesma: “It’s awesome to be able to represent New Jersey. I’m so happy to have this opportunity. This has been a great experience so far.

“I don’t know too much about my opponent. I like to focus on what I do and make adjustments when I have to.”

Bernardo: “It’s been a hard road getting to where I am today and I’m grateful to be fighting for MMA Pro League.

“I’m facing a very experienced fighter. He has a black belt in jiu-jitsu and is a well-rounded fighter. He’s still going to have to get in there and fight me. I know we’re going to go to the ground eventually and I plan to choke him out.”

Pagano: “I’m proud to be a part of this first MMA Pro League show. I’m excited to represent my state in the cage.

“My opponent seems very well composed. He likes to sit back and box before looking to throw. Everyone has a plan until you get punched in the face, so I’m going to go out there and just fight.”

Montanez: “It feels really good to be in this position. Fighting professionally has been a dream of mine and now it’s here. I’ve worked so hard to get to this moment and I’m really excited.

Osborn: “I’m excited to go out there and do what I love to do. I can’t wait to get in that cage and stare across at a guy who’s ready to take my head off.

“I know I’m facing an undefeated amateur making his pro debut so I’m ready for anything. I’m ready for the whole nine yards. I’m predicting a finish.”

Pinafiel: “It means everything to me to have this platform. This is an opportunity to build upon my career. I’ve had amazing treatment here. I’m going for it all on Saturday.

“I’m facing a tough guy in his own backyard. But I’m here to make a statement. I want to take him out and give everyone a good fight. I’m hoping he brings the best out of me. I am going to win. I’m ready to finish him any way possible.”

Sears: “This means a lot to me. I’ve fought in 10 leagues and this has been the best experience by far. MMA Pro League just cares about their fighters.

“Samir looks really tough and I know he has a lot of experience. Everyone is dangerous at this level and it only takes on punch to go to sleep. I’m going to go for the finish right from the start.” 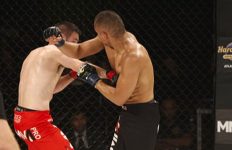 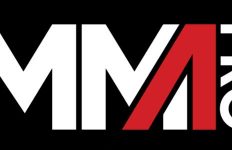 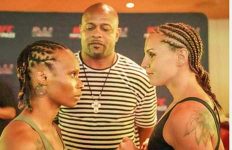