Below are post fight quotes and the official scorecard from the Shawn Porter unanimous decision over Danny Garcia for the vacant World Boxing Council World Welterweight Title in front or 13,058 at the Barclays Center on Saturday September 8th. 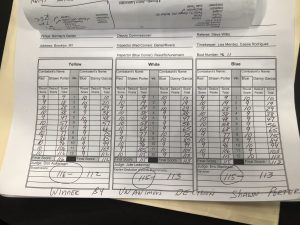 “I knew he was going to be accurate. The game plan for me was to be accurate from the outside and show we could beat him without roughing him up on the ropes.

“This title means a lot to me. It meant a lot to boxing and I wanted to be a part of that.

“He tried to outhustle me, mostly at the end of the rounds. He did a tremendous job.

“There was some things missing tonight and those aren’t going to be there in the next one.

“I thought I did enough to win. It was a close fight. The judges didn’t give it to me.

“I busted my head on the inside, plus a couple headbutts on my nose. It is what it is this is boxing. .

“He was throwing a lot. I had my defense tight so it wasn’t effective. I thought I landed the clearer shots. I thought I won this fight.

“I have to sit back, relax and see what’s next for me.”