At UFC 226, it will be champion vs champion as Stipe Miocic goes head-to-head against Daniel Cormier. As the heavyweight champion, Miocic already boasts an obvious advantage, but with current light-heavyweight world champion Cormier having previously fought at heavyweight level, nobody can underestimate him. The last time two champions faced each other in the Octagon was UFC 205, back in November 2016, when featherweight champion Conor McGregor stepped up to fight lightweight champion Eddie Alvarez. McGregor became the first ever person in the sport to hold two titles at the same time, and Cormier’s preparations have been focused on going all-out for the win that will make him the second.

Thirteen reasons to fear the fists of Miocic.

This is the kind of fight to really whet the appetite. In time-honored fashion, both fighters have expressed the belief that victory will make them the greatest of all time, and while Miocic will be the favorite, he is not a huge one. This is reflected more tangibly by UFC odds on Betway which (as of 1 May 2018) price Miocic at just -118 to beat Cormier, and some of Miocic’s more ardent fans are already calling him the best heavyweight ever in the sport. Weight class disparity aside, beating Cormier would be yet another reason for them to say it. In addition to being a heavyweight, Miocic, as noted on Sherdog, also has the height advantage, and the reach advantage that usually goes with it. Everything seems to be in his favor, but some experts would agree that Cormier’s resilience against punishment is without equal in the UFC franchise.

Miocic – more than a power puncher

Miocic’s punches will be like nothing Cormier has faced before, with the heavyweight champion knocking out 72% of his opponents over the course of his career compared to Cormier who, as noted on Fox Sports, has knocked out just 45% of his. However, those stats hide Cormier’s ground game as he has beaten 20% of his opponents by submission compared to Miocic’s mere 6%. Though this goes with the territory of their respective styles, UFC history is awash with examples of boxers and kickboxers who went for the jugular, only to be taken down.

While many sceptics of Miocic see him as just a power puncher with little brain, the fact remains that the lines between UFC and boxing are becoming ever more blurred, and he is a lot more than a one-punch wonder. He has shown abilities as an excellent wrestler, which may not only be able to repel Cormier’s takedowns, but also help him to dominate Cormier on the ground due to his sheer size advantage. Yet, even if his ground game is nullified in the early stages, Cormier still has power and knows how to make his opponents tap out. Ultimately, unpredictable and flexible tactics will be the order of the day 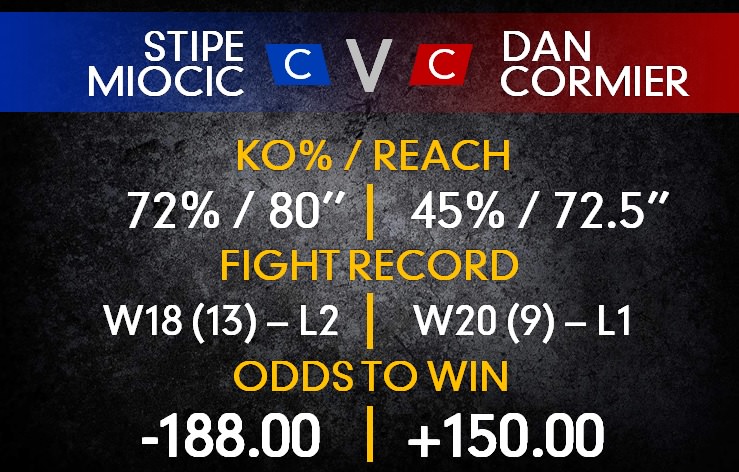 No matter what, Cormier wins

Another factor in Miocic’s favor is his age, or more accurately, Cormier’s. While the heavyweight champion is not young in the sport at the age of 35, at 39 Cormier is definitely reaching the end of his career. By a fighter’s thirties, four years can mean a lot of difference, but this is potentially an exception. On the evidence of his last fight against Jon Jones, as recalled by Bloody Elbow, Cormier cannot truly claim to be the greatest. Regardless, he is clearly a legend of the sport and will go down as such whether he beats Miocic or not. For those seeking multiple reasons – other than experience and versatility – to back Cormier, there is also the recent form of both fighters to consider. Cormier has only ever lost to Jones, while Miocic has lost to two opponents, although he did avenge one of those losses when he knocked out Junior dos Santos last year.

Although the most hyped fights can often disappoint, this is undoubtedly the kind of heavyweight clash that everyone wants to see, and it promises to rival the drama seen on the big screen, in films such as The Cage Fighter. If Cormier can become only the second person to hold titles in two divisions then it will only add to his legacy. Miocic, meanwhile, has already completed his personal objective of having the highest number of successful heavyweight defenses. While he will be eager to add to that record in July, in illustrious Las Vegas, Cormier’s hunger surely eclipses that of his opponent. The proverbial cards all look stacked in Miocic’s favour, but Cormier has been too good for too long to simply overlook for this fight, and UFC fans are in for a memorable contest between two great fighters, regardless of their affiliations to one or the other.

UFC Restarts May 9, 2020. Should Boxing Return in May As Well? What The Experts Say→