Keith Thurman in Main Event of

Tickets for the live event, which is promoted by DiBella Entertainment, start at $50 (not including applicable fees) and are on sale now. Tickets can be purchased online by visiting www.ticketmaster.com, www.barclayscenter.com or by calling 1-800-745-3000. Tickets are also available at the American Express Box Office at Barclays Center. Group discounts are available by calling 844-BKLYN-GP.

Here is what Garcia and his father and trainer, Angel, had to say Wednesday from DSG Boxing Gym:

“At the end of the day, I prepare myself to be 100 percent ready for anything Thurman does. I’m a true champion because I’m able to adapt to anything he can bring.

“Training camp has been crucial. We’re working hard and pushing ourselves to the limit. We’ve done everything we have to do so far. It’s almost fight time.

“We’re just working smart and hard. We’re sharpening and working on a great game plan. I have to stick to the game plan and adjust if I have to.

“I’ve been in a lot of big fights, so I can’t psych myself out. On March 4 I’m going to show the world again why I’m a real champion.

“There’s no better feeling than unifying the title. I did it at 140 and now I have the chance to accomplish my goals at 147. It’s up to me to take advantage of it.

“There’s been a lot of trash talk, but come March 4, that’s all over. We each need to do what we do best, and that’s win.

“I think I have a lot of advantages. One of them is that Barclays Center is like a second home. I’m the sharper, more patient and more battle-tested fighter. I’ll prove it on March 4.

“Thurman’s fight against Porter was a good fighter but I’m a different fighter than Shawn Porter. I bring a whole different skill set.

“It feels good to represent my city. This is what Philadelphia fighters are all about. We rise to the occasion. I’ve been doing it my whole career.

“There’s a lot of pressure on me to be the best. That’s what keeps me focused. I think about the eyes that are going to be on me and I have to go in there and look my best. These kind of fights really bring out the best in me.”

“For me it’s an important fight every time Danny steps in that ring. We train the same way no matter who the opponent is. We have to take everybody very seriously. There’s nothing easy in life. From the beginning of his career to its end.

“Thurman is undefeated but just because they call him ‘One Time’ doesn’t mean he’s going to do that to Danny. My son has a great chin. We don’t know about Thurman’s chin. He hasn’t fought a guy like Danny. This is a good sight for Danny to take into even bigger successes.

“Danny has power just like Keith. We’re not scared of him. This is the hurt game. You know you’re going to get hit. We just don’t know if he can take a punch. 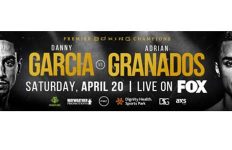