In the round in his eighth appearance at the Barclay Center Garcia is a fan favorite. He forced the fight coming forward as southpaw Redkach mostly used his jab. Garcia did well winning the round. In the second round Garcia landed numerous lead rights to the body and head of Redkach. In the third round Garcia continued out scoring Redkach mainly with right crosses seemingly looking to end the fight early.

In the fourth round Redkach landed a left to the body that was immediately countered by a Garcia right that knocked Redkach off balance. Garcia put on a clinic of punches hurting Redkach on several occasions causing Redkach to clinch throughout the round. In the fifth round Garcia continued to control the action. In the final twenty seconds the action picked up with Garcia having Redkach against the ropes. He would switch to southpaw when fighting inside on several occasions landing a left hook to the body.

In the tenth round Redkach for the first time in the fight was coming forward knowing he had lost every round up to that point. Garcia won the round but looked to land that fight ending right. The eleventh round was more of the same with Garcia and Redkach fighting with more punches thrown by Redkach but not landing half of them.

“First of all I want to thank God, Team Garcia, Brooklyn fans and Al Haymon. I got bit in the eighth round and he said “Mike Tyson” when he did. I had to lose some weight for this one and need to train harder for the next one. Pacquaio, Thurman or Mikey Garcia would be possibilities for the next one,” said Garcia.

In the first round both boxers used effective jabs. Fulton seemed to outwork Khegai in a close round. In the second round Khegai landed some left hooks along with continuing in a jab war. In the third round Khegai a former Thai fighter tossed Fulton to the canvas and was warned by referee Steve Willis. Fulton has landed a 3-punch jab showing his hand speed advantage.

In the fourth round Khegai cornered Fulton landing three rights to the chin. Fulton was keeping his jab as his weapon. In the fifth round Fulton finally starts the round with a combination. Khegai continued to be the aggressor but Fulton used uppercuts and rights to the body. Khegai had a mark under his left eye. In the sixth round Khegai caught Fulton in a corner on several occasions opening up on him. Fulton was back to primarily using his jab.

In the seventh round referee Willis has warned the boxers about stepping on each others feet for the third time. Usually one of the boxers have to be a southpaw but not in this one. After what seemed like an even fight in the first half of the twelve rounder this was a closer round than the others. In the eighth round Fulton had the biggest edge in a round so far going to the body well.

In the ninth round near the last minute Khegai showed his frustration hitting Fulton behind the head with a right hand and was warned by referee Willis “this will be the last time”. Fulton continued having another good round. In the tenth round Fulton backed Khegai into a corner. Khegai seemed to be slowing down. Fulton continued to use his longer reach as Khegai’s face is swelling.

In the eleventh round Khegai opens up swinging wild overhand punches that for the most part are landing on the head of Fulton. He knows he needs a knockout losing since an even first half of the fight with Fulton taking the last four rounds but not this one.

In the twelfth and final round Khegai comes out wild punches but Fulton is avoiding most of them while countering with solid rights on the chin. Fulton finished strong.

“I felt good and he was a tough opponent. I want that WBO title,” said Fulton. Philly unbeaten (25-0, 23 ko’s) welterweight contender Jaron “Boots” Ennis was asked about fellow Philly fighter Fulton’s performance and he expressed he looked good. Asked about Garcia, another Philly boxer in the main event and Ennis said he expects a knockout win by Garcia. He expressed his wish to getting some of the top contenders in the ring.

In the first round Santana kept coming forward looking awkward following as Hurd countered him with a solid jab. It was almost halfway thru the round before Hurd threw and landed a right on the chin. Santana has hardly landed a punch. It wasn’t until the final thirty seconds Santana caught up with Hurd against the ropes with a combination to the body and head.

In the second round Hurd controlled the round with his jab and combinations countering the oncoming Santana. In the third round Santana was 1-3 in his last four fights but drew with Hurd’s last fight opponent Julian “J-Rock” Williams early in their career. Hurd continues to open up on Santana.

In the fourth round Hurd continued working the body of Santana. It was until the final minute Santana got in a body shot of his own. In the fifth round Hurd stays in the middle of the ring out slugging Santana except when Santana steps to his right landing his left hook which didn’t happen often. Hurd not moving around the ring this round gave Santana chances to land body shots.

In the sixth round Hurd landed vicious body shots. In the final minute Hurd started moving again as Santana kept after him trying to catch him against the ropes. In the seventh round Hurd doesn’t respect the lack of power from Santana. The fans are encouraging Hurd to finish off Santana as they await the main event.

In the eighth round Santana continued to come forward walking into most of the punches from Hurd. In the ninth round referee Arthur Mercante, Jr. separated the fighters for one of the few times in the fight. The crowd started getting restless again showing their displeasure that Hurd is not stopping his smaller opponent.

In the tenth and final round Santana continued to show his courage mixing it up with Hurd. Santana continued finishing stronger than Hurd. In the final ten seconds Hurd finally dropped Santana with a right uppercut on the chin for an 8-count by referee Mercante. At the end of the fight Hurd showed his good sportsmanship following Santana to his corner patting him on the shoulder.

“I want to thank God for the opportunity. I look forward to getting a title fight but will have to wait and see what happens,” said Hurd. 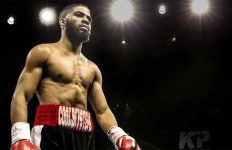