Hard Hitting Promotions continue filling up the seats at the SugarHouse Casino in Philadelphia with co-promoters Manny Rivera and Will Ruiz leading the way!

In the opening round the southpaw Robinson used an effective jab. Palacios landed a straight right to the chin of Robinson getting a reaction from the crowd. Just prior to the bell an overhand left by Robinson drove Palacios into the corner and down. He was up as the bell sounded.

In the second round Robinson became very aggressive landing a good body punch with a left hook. A straight left dropped Palacios who was holding his nose taking the count on one knee as referee Gary Rosato counted him out.

“I didn’t know until the weigh-in that Palacio was so tall. After a feeling out round my trainer (“Bozy” Ennis) and I figured it out to go to the body and it worked,” said Robinson. This win puts Robinson one step closer to moving up in the rankings and a title fight.

In the first round on two separate occasions a Carto jab put Najera back several steps. Near the end of the round Najera had Carto in a corner and landed several punches to the head of Carto who came back as the bell sounded. In the second round a roundhouse right by Najera landed on the neck of Carto. A lead right hand by Carto drove Najera into the ropes. With about ten seconds left in the round Carto rocked Najera with a right to the chin.

In the third round Najera continued to throw wild punches as Carto countered him well while avoiding those wild swings. Carto opened up with punches in bunches having Najera backing up taking a beating time and again when referee Talmadge saw enough and stepped in and waved it off saving Najera from any unnecessary punishment. Najera came in nine pounds over the contracted weight but was able to take three pounds off with Carto giving away five pounds. “I knew he was heavier than me but knew I would eventually catch up to him,” said Carto. That’s seven straight knockouts in as many fights.

In a mismatch Pizarro chased Padilla who mostly covered up but for some reason would end up in a corner and Pizarro would pummel him. When Padilla ended up in the opposite corner it was all over as Pizarro landed a flurry of body punches dropping Padilla to the canvas and not making an effort to get up as referee Bashir counted him out.

About a minute into the round a combination from Socarras to the head and down went Meraz. Referee Rosato gave him the eight count and Meraz got up and managed to get to the end of the round. In the second and third rounds Socarras simply landed more punches then Meraz with some good left hooks to the body.

In the fourth and fifth rounds the pace continued with Meraz seemingly looking to coast to the distance. In the sixth and final round Socarras did enough to win the round and just before the bell sounded he landed his best punch since the first round a left hook to the chin of Meraz.

All three Steve Weisfeld, Alan Rubenstein and Anthony Lundy scored it 60-53 for Socarras.

Adorno threw one punch a right hand to the head of Hernandez and down he went. The referee Blair Talmadge waved it off without a count knowing Hernandez was out before he hit the canvas. The ring physician immediately came into the ring. After close to ten minutes Hernandez was able to get up on his own and leave the ring.

Padilla went out fast looking for the knockout and it came that fast landing a combination to the chin of Wilson. Referee Bashir counted Wilson out on a knee.

In the opening round hit Armando about four times and down he went refusing to get up until the referee Talmadge said “ten”!

The opponent for Kali Reis, who is a former world champion never showed up. Kita Watkins who challenged for the world title three times made the weigh-in Thursday night but didn’t show up for the fight.

The fans seemed to enjoy all the early knockouts and continue to fill the arena at the SugarHouse Casino. A ten count was given for veteran trainer George James, the manager of Christian Carto Jimmy Binns, Jr., and the father of top cut-man Joey Eye after a long illness. 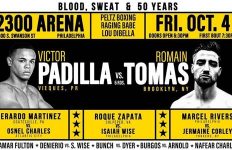