The return of The “New” Ray Robinson after 18 months of inactivity brought him one fight closer to challenging WBC champion Danny “Swift” Garcia for his title. Robinson is ranked No. 4 in the WBC. Hard Hitting Promotions packed them in for the second straight show at the casino. Partners Manny Rivera and Will Ruiz who also does the matchmaking couldn’t have been any happier with a solid night of boxing. They will return December the 16th to the casino.

In the Main Event returning after 18 months of inactivity welterweight “New” Ray Robinson, 21-2 (10), of Philly fought a picture perfect fight causing a gutsy Nicaraguan Santos, “El Toro” Benavides, 25-11-2 (19), out of Houston, TX, not able to come out for round five.

In the opening round Benavides charged forward swinging wildly as Robinson tattooed him with his jab. Benavides started clowning around with his hands down and Robinson nailed him with a right hand and followed with a right hook to the head knocking Benavides down at the time the timekeeper gave the 10 second warning. In the second round Robinson pin pointed almost every punch with accuracy hurting Benavides who showed a lot of heart but was taking a licking.

In the third round Robinson landed almost a dozen punches without return from Benavides. Robinson was landing right hooks to the body and then going to the head of Benavides. A powerful left by Robinson stopped Benavides in his tracks. In the fourth round Robinson gave the gutsy Benavides a beating to both the body and head. The corner of Benavides wouldn’t let him come out which was a wise move. Robinson put on a “picture perfect” exhibition tonight. He had been out of the ring 18 months and it never showed. It was his tenth straight win having not lost since 2010 in back to back losses. “I felt good and I am ready for bigger and better things,” said Robinson. He had good gym work with his trainer’s son Jaron “Boots” Ennis who is 6-0 and a “can’t miss” 18 year-old.

Super welterweight Steve Martinez, 17-3 (13), out of the Bronx, won a close if not controversial decision over Jeremy Ramos, 9-5 (4), of Colorado, over 8 rounds.

In the opening round Martinez was very cautious looking to counter and got outworked by Ramos. In the second round Ramos continued to outwork Martinez pinning him against the ropes which seemed to wake Martinez up as he started landing left hooks to the body hurting Ramos. In the third round Martinez took over with a solid body attack mostly landing left hooks. In the fourth round Ramos came back from the previous round to pin Martinez against the ropes. Seems like 90% of the punches Martinez throws are left hooks. Ramos switched to southpaw briefly. Twice Martinez had his mouthpiece knocked out.

In the fifth round it turned out to be the best round up until then with Martinez landing the harder punches with that left hook of his. In the sixth round Martinez dominated Ramos with left hooks to the body and head. In the seventh round for the third time in the fight Martinez had his mouthpiece knocked out. Referee Talmadge wisely took a point away from Martinez which is the rule once the mouthpiece is out for the third time. When it continued Martinez was on the attack knowing he lost a point in a close fight. In the eighth and final round with the fight up for grabs Martinez seemed to get over with the left until a right hand from Ramos stunned Martinez which was the best punch of the night. Ramos was bleeding from the nose but had the heart of a lion. This was supposed to be a walk in the park for Martinez.

Judge Steve Weisfield had it 77-74, Alan Rubenstein, Jr. 76-75 and Linday Page 75-74. This writer had it 76-75 for Ramos. “It was a good fight and I thought I did enough to win the fight,” said Ramos. The manager of Martinez Brian Cohen seemed to agree with this writer that he may have hurt his right hand because he only threw it sparingly.

Local fan attraction bantamweight Christian Carto, 4-0 (4), of Philly, scored a second round technical stoppage at 1:42, over Angel Carbajal, 2-5 (0), of Chicago.

In the opening round Carto was landing combinations to the head causing Carbajal to do a lot of holding. Carto landed 4 punches without return near the end of the round. In the second round Carto landed a combination driving Carbajal into the ropes. Carto followed with a lead right to the head causing Carbajal’s knees to buckle. Carto went right after him landing a flurry of punches causing referee Talmadge to step in. Carbajal was not happy with the stoppage that may have been a little too quick by referee Talmadge. Carto is a young man with limited words and simply said “the fight went good.”

In the opening round Pizarro seemed to be loading up getting some power punches in and hurting Adams just prior to the bell causing him to hold on. In the second round an overhand right from Pizarro dropped Adams. Upon rising he was in no condition to continue causing referee Shawn Clark to call a halt. The 21 year-old Pizarro was in and out of the gym but is back full time and it shows.

The younger brother of Angel the 17 year-old amateur sensation lightweight Branden Pizarro, 1-0 (1), of Philly, scored a sensational knockout at 0:39 of the first round over Ezequiel Ocasio, 1-3 (0), of PR.

In the opening round Pizarro showed a lightning jab. Pizarro caught Ocasio with a pair of right hands to the head dropping him to his knees and not able to beat the count of referee Clark. Word was Boxing Director fined Ocasio $250.00. “In my pro debut in my hometown was great. Team work makes the dreams work,” said Pizarro. His father assists Bozy Ennis in the corner of both sons.

In the opening bout super lightweight southpaw Jeremy Cuevas, 1-0 (1), of Philly, scored a second round technical stoppage at 1:32 of the round over Luis Ramos, 0-3 (0), Carolina, PR.

In the opening round it was all Cuevas. Ramos was doing a “Muhammad Ali” Rope-A-Dope. In the second round a right hook dropped Ramos in a neutral corner. Upon rising from referee Talmadge’s count Cuevas jumped on him and the referee wisely called a halt.

It looked like another sell out crowd by Hard Hitting Promotions who will return to the SugarHouse Casino December 16th! 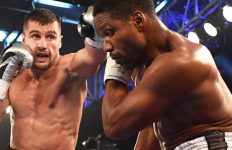 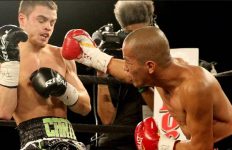 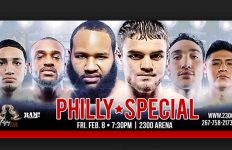