By: “The Legendary” Jack Obermeyer

(their first ever pro boxing card)

Came down the day before for the weighin (beer drinking Brits make their vocal presence known) and bunked at nearby Harrah’s (free of course). Note: HBO invited some of us to watch live the Kovalev-Cleverly fight. I – in writing – picked Kovalev in four!!!!! Thanks to fellow press rower, Tim Starks, Dan Rafael and I share the last two slices of his $15..00!!! casino pizza and that was for a small one.  “Cold Pizza” nonetheless.

Bout #2)  Tall THOMAS DULORME, 141, Carolina, P.R. vs  little southpaw
FRANKIE FIGUEROA, 142, The Bronx.   RESULT: TD W-TKO-8 (0:47)
Sort of an ugly affair. FF is a tricky kind – trying to steal a point
here or there and survive. He got dropped in the second, and fifth, while TD lost a
point for low blow (had done it earlier in fight) later in fifth. End
comes as ED finally just moves ahead and just punches FT around the
ring, getting him in a corner – RSF. It was a shutout on all three
official cards

YU lost point in tenth for low blow.  A third somewhat
dreay “battle”, as prospect Ugas fails to impress agst no punch foe,
who offers up little but keep away jabs and some slick movement.   Ugas
looks methodical,
actually slow. Ready for this nonsense: The above bout was billed as
for the vacant
WBC Latin junior interim Championship Shot me now!

Like Dib did to Oliver just six weeks back, he gotphysical and little
Mike just couln’t keep him off for any sustained length of time.  P.S.
JB – cut left eye in round five.

Bout # 6)  WHITE BOYS RULE!!! (Somebody has to win) DANIEL GEALE, 159
1/2, Mt. Annan,
Australia, defends IBF belt  vs DARREN BARKER, 159 1/2, London. .
RESULT:.DB W-12S (114-113 for each and Barbara Perez had it 116-111 for DB – Me: 114-113 for DB
Lots of misses early, but both not shy about getting it on –
bouncing
around in ready-to-rumble fashion.
but are they talented? Both look under-sized. Just sayin’, but what
would even an Iran Barkley have done to them? Starting to look like
twelve rounds of mid-level fury. Have to say, it is entertaining, and
then body shot drops DB early round six for a count of 8. Ref almost
stops it later, but DB rallies!  Me 57-56 DG after six.
The two keep up an energetic pace. Nothing fancy, nothing powerful,
but a give and take nonetheless. 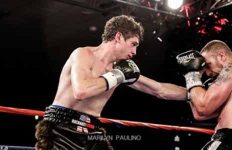 LaManna and Young Win at Claridge in AC Saturday!→ 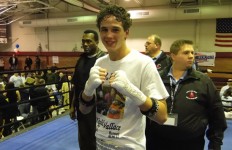 Thomas “Cornflake” Lamanna Returns to the Claridge in AC Saturday!→ 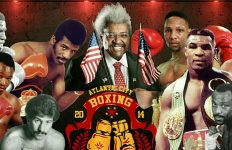 A Weekend to Remember at Atlantic City’s Boxing Hall of Fame!→