In the first two rounds Conlan’s right jab controlled the match with little offense from Marriaga. Conlan knocked Marriaga off balance halfway through the third round. In the fourth Marriaga finally landed his first effective shot a right on the chin of Conlan halfway through the round. Conlan continued dominating the fight.

In the fifth and sixth rounds Conlan continued giving Marriaga a boxing lesson. In the seventh and eighth rounds what looked like Marriaga fell forward were ruled knockdowns. In the ninth round it looked more like a knockdown scored by Conlan. In the tenth and final round Marriaga knowing he needed a knockout fought well for half a round rocking Conland with a right on the chin before Conlan took over right to the bell.

Following a war in the co-Main Event this one was tame!

In the first round both fighters threw shots without a break in the action with Jenkins landing the last half dozen shots. In the second round the action continued from both fighters to the delight of the fans. The taller Jenkins gave away his height getting down lower landing much to the body of Jenkins. In the third round both fighters continued throwing bombs with Jenkins having a slight edge. McKenna suffered a small cut over the right eye. In the fourth round Jenkins warned twice for hitting behind the head as the wild swinging from both continued.

In the fifth round McKenna started moving around the ring boxing Jenkins more than slugging in taking the round. In the sixth round McKenna went back to staying in front of Jenkins going back to a war he didn’t win in what seemed to even the score overall.

In the seventh round the slugfest continued with Jenkins seemingly the fresher of the two at the end of the round. In the eighth round the action slowed a bit as McKenna countered Jenkins well enough to take the round.

In the ninth round Jenkins did little offensively in the first minute allowing McKenna to have his was with his jab. At the end the swelling was evident around the right eye of McKenna who had a good round. In the tenth and final round McKenna almost had Jenkins down falling forward a minute into the round. Both fighters continued throwing right to the bell having the fans screaming in delight.

In the second round McCrory scored a knockdown a minute into the round with a flurry. Though down, the Mexican came back making it a good round. In the third round both had their moments throwing bombs with McCrory suffering a small cut outside of the right eyebrow though taking the wild swinging round from both fighters.

In the first round Donavan out worked the taller Hill moving him backwards while Hill moves to the right instead of the left of Donovan. In the second rounds final twenty seconds Donovan drew blood from the nose of Hill with an overhand left. In the fourth round Hill was coming forward at times again but with a minute remaining Donovan landed a solid left to the chin rocking Hill.

In the fifth round with just under a minute remaining a straight left from Donovan on the chin rocked Hill having him backed unto a corner. In the final seconds Donovan did a bit of showboating. In the sixth round Donovan backed Hill into a corner landing a left to the body hurting Hill but then backed off. In the eighth and final round Donovan went more to the body looking for a knockout

Score from Referee Aman McGill 80-72 as did this writer have it.

Walker took the first three rounds going to the body of Martinez while avoiding counter shots. In the fourth round Martinez continued being the aggressor but having trouble landing his shots with gloves held high. In the sixth and final round Martinez had his best round good enough to win it but not the fight.

Referee Aman McGill had it 59-55 as did this writer.

In the first round it was all Molloy out landing Vazem. In the second round Molloy landed 3 body shots the last a right and down went Vazem arising at 9 but Referee Hugh Russell, Jr. wisely waved it off. 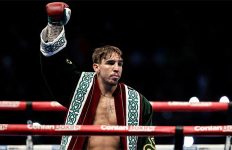 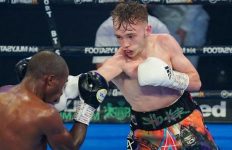