At the Gold Coast Convention Centre, Broadbeach, Australia, before a large crowd Saturday over ESPN+ presented in the Main Event IBF World Cruiserweight champion Mairis Briedis of Latvia was upset in a brutal bloody fight to the top ranked Jai Opetaia of Australia over 12 rounds.

In the first round there was little action with Briedis wrestling Opetaia to the canvas halfway through the round. Briedis suffered a cut on the right eyebrow late in the round. In the second round the aggressor Opetaia had a good round but possibly had his jaw broke. In the third round it was close with Briedis landing a right uppercut knocking the head of Opetaia back in the final seconds of the round.

In the fourth round Opetaia had Briedis hurt with a solid right uppercut from the southpaw challenger drawing blood from the nose of Briedis who went to the wrong corner at the end of the round. In the fifth round Opetaia continued doing enough damage having blood flowing from the nose of Briedis whose best punch was the last one of the round a right on the chin of Opetaia who took another round.

In the sixth round the challenger Opetaia uses his jab to draw blood from the nose of Briedis who halfway through the fight may be seeing his title changing hands. In the end of the first minute Briedis rocked Opetaia with a right on the chin having him holding on. It was the best round for the champion up to this point.

In the end of the first minute Opetaia landed a right hook to the chin of Briedis starting the blood flowing. Halfway through the round a right uppercut from Opetaia on the chin rocked Briedis. In the tenth round Briedis landed a right uppercut on the chin having Opetaia holding on in bad shape by the end of the first minute of the round. Briedis may need a knockout and had a big round.

In the eleventh round Briedis also with a cut on the bridge of his nose landed well with the right uppercut while Opetaia whose jaw is swollen and possibly broke did enough to keep it close losing the round. In the twelfth and final round Briedis continued having Opetaia holding throughout the round being hurt inside with Briedis right uppercuts. Briedis also cut on the right eyebrow at the end. Referee Chris Flores had his hands full.

In the first two rounds there was no feeling out between the two of them. Mazoudier started out better but by the halfway mark Camilleri finished stronger. In the fourth round the aggressor Mazoudier landed several rights to the chin of Camilleri in the final minute having Camilleri on the run.

In the fifth round at times Mazoudier would turn southpaw. It was usually Camilleri causing clinches that Referee John Watson did a good job of breaking. In the seventh round Mazoudier continued finishing the stronger of the two. The right eye lid of Camilleri had a small cut in the final seconds of the round. In the eighth round’s halfway point Camilleri wrestled Mazoudier to the canvas. Mazoudier continued having an edge at this point.

In the ninth round Mazoudier had Camilleri holding more than usual looking to stop him due to cut. In the tenth and final rounds final thirty seconds Mazoudier landed a solid right to the chin having Camilleri in trouble right to the bell.

In the first round it was all Chevalier the shorter of the two countering well until the final seconds when Wallace landed a combination to the chin of Chevalier. In the second round Wallace did well using his reach having Chevalier on the defense. In the third and fourth rounds Wallace continued on the attack having a good round against the world contender Chevalier.

In the ninth round Chevalier was trying to make it a closer fight looking behind while Wallace has slowed down. In the tenth and final round Chevalier tried for the stoppage but Wallace’s reach kept him from mounting enough offense to take the win in the eyes of the crowd.

In the first round Hardman had the better of it and in the final fifteen seconds a vicious lead right from Hardman on the chin and down went Hartas flat on his face with Referee Paul Tapley immediately waving it over. 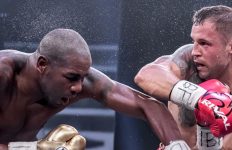 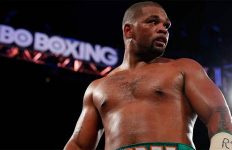