In the first round a left hook from McCrory to the chin had a strange reaction from Neves as if to be putting his mouthpiece back in. In the second round McCrory dropped Neves with a counter left. He took the 8-count but was hurt. McCrory jumped all over him dropping him with another left hook causing the referee to wave it off for the stoppage. Neves complained while on the seat of his trunks on the canvas. He didn’t know what hit him!

In the five rounds it was all Crocker. In the sixth round a left hook from Crocker dropped Haroyan with half a minute left in the round. He had been winning the round when he got dropped. In the seventh round Crocker scored a left hook to the ribs and down went Haroyan taking the count up at nine when referee Howard Foster waved it off.

In the first four rounds both southpaws with Clark coming forward but McComb countered him taking all the rounds. In between rounds Clark stood bouncing up and down ready for the fifth round. The taller McComb used an effective jab to control the fight the rest of the way defeating the game Clark with both fighters cut at the end. 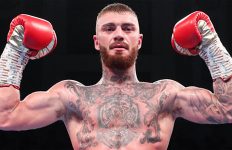 Lewis “The Croc” Crocker Wins in War with Deniz Ilbay in UK!→